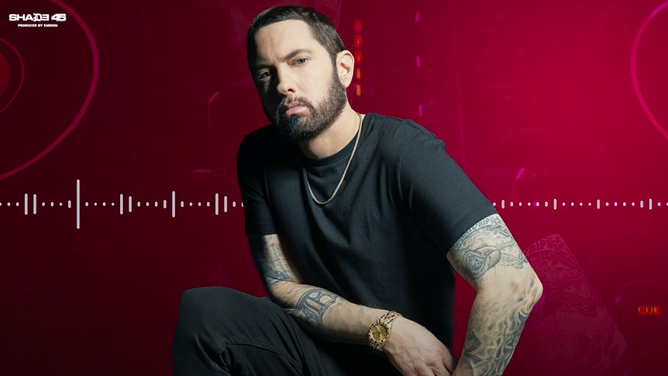 Eminem went on Shade 45 to talk about his recent album Music To Be Murdered By: Side B, and during the conversation, he addressed why he apologized to Rihanna on the song “Zeus” after an old song leaked where he made light of her domestic violence case.

Em claimed he didn’t even remember making the song, which leaked in 2019.

“When it first happened, I was like, first, I didn’t know how, how somebody got it,” said Eminem. “Second of all, I have no, zero recollection of even remembering doing that, that verse, like the rhyme schemes didn’t even sound like familiar to me. So I was caught off guard too. I was like, ‘what the f-ck, I said that?’”

He went on to explain the song was from the Relapse era when he was recovering from a drug addiction, but that wasn’t an excuse.

The snippet where Eminem mentioned Rihanna was an unreleased verse from the 2011 B.o.B track, “Things Get Worse,” which leaked in 2019. On the verse, Eminem rapped:

Let me add my two centsOf course I side with Chris BrownI’d beat a b-tch down, tooIf she gave my d-ck an itch, nowIt’s just ridiculous how

On “Zeus,” Eminem not only apologizes for the song but also admits he was wrong for saying the lyrics:

But, me, long as I re-promise to be honestAnd wholeheartedly, apologies, RihannaFor that song that leaked, I’m sorry, RiIt wasn’t meant to cause you griefRegardless, it was wrong of me, but

Rihanna wasn’t the only topic Em discussed during his interview, he also talked about his still brewing disagreements with Snoop Dogg.

Listen to the interview above and read all the lyrics to Eminem’s “Zeus” on Genius now.