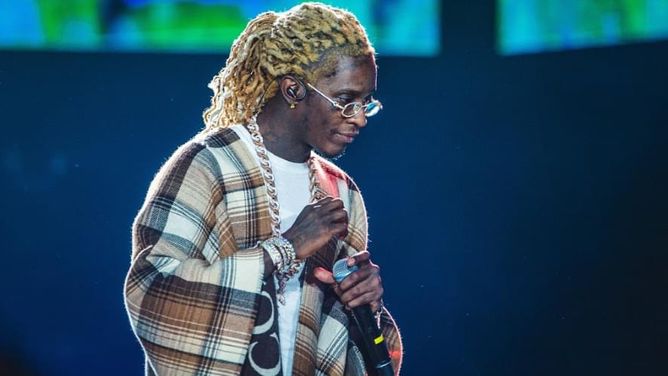 Last week, Young Thug started trending on Twitter with what at first appeared to be yet another bold claim about a veteran rapper. This time, he discussed the influence of JAY-Z in comparison to his own career. During an appearance on the Million Dollaz Worth of Game podcast, Thugger boasted about his catalog’s popularity. He offered an off-the-cuff reference to JAY-Z that clearly appeared to be him misspeaking, but nonetheless gained a life of its own on social media.

After an awkward moment, the Atlanta rapper quickly tried to backtrack by saying he wasn’t trying to reference Jay specifically.

“I know he do, he probably got 50 of them b-tches. I’m not just literally saying him. I’m just saying n-ggas who you thinking,” Thugger said. “I done did shows with everybody bro. I done seen n-ggas, like, ‘Damn, they ain’t know this song, n-gga?’ I’m backstage, like, ‘I thought they knew this song from him. They ain’t even know this song.’ I’m so scared to get booed I don’t even perform a song they won’t know.”

Young Thug addressed the issue soon after the interview started causing a stir on social media. “Don’t have JAY-Z on me because of this internet sh-t,” he wrote in an Instagram post. “I was talking too fast, but y'all know what I meant.”

Fans may have been extra weary due to Thugger casing a stir back in November by appearing to dismiss the influence of André 3000. At the time, Thug said he “ain’t never paid attention” to the OutKast rapper’s music despite previously praising him.

This isn’t the first time Thug has spoken on Jay. Back in 2015, he told GQundefinedundefined that Jay represents an important, but bygone, era of rap. “If you’re 30, 40 years old, you’re not getting listened to by minors,” he said. “Like, JAY-Z has some of the sickest lyrics ever, but I would never buy his CD, just because of my age and because of his age. By the time I turn that old, I ain’t gonna be doing what he’s doing.”

Genius previously broke down the influence of Young Thug:

Catch up on all the lyrics to Young Thug’s biggest hits on Genius now.