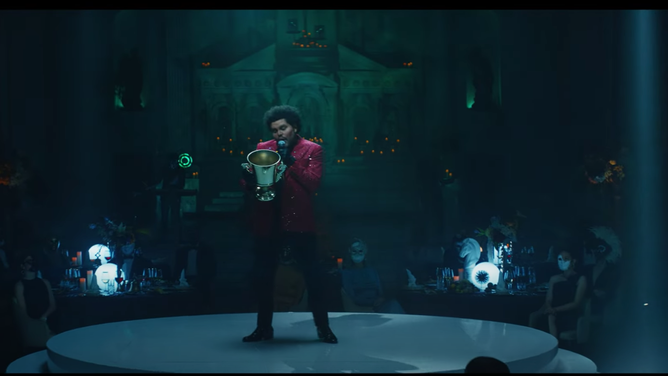 The Weeknd is still promoting his 2020 album, After Hours, and he just released a new music video for his song “Save Your Tears.” The video finds the Toronto singer in his usual After Hours-era red blazer getup (albeit with more makeup than usual) performing for an audience at a masquerade ball, but about halfway through the video he delivers a pointed symbolic gesture by picking up and tossing a trophy across the stage. The moment seems like an allusion to the recent Grammy snubs for After Hours.

Shortly after receiving no nominations for an album that was both a huge critical and commercial success, the singer sent a message on Twitter.

His tweet came hours after TMZundefined claimed there was a conflict between Weeknd’s scheduled Super Bowl Halftime Show performance and his plans to appear on the Grammys stage that may have affected his nominations this year. Both programs will air on CBS within one week of each other.

“We understand that The Weeknd is disappointed at not being nominated. I was surprised and can empathize with what he’s feeling. His music this year was excellent,” he said. “We were thrilled when we found out he would be performing at the upcoming Super Bowl and we would have loved to have him also perform on the Grammy stage the weekend before…To be clear, voting in all categories ended well before The Weeknd’s performance at the Super Bowl was announced, so in no way could it have affected the nomination process.”

The Weeknd was not the only artist who took issue with the Grammys this year. Justin Bieber and Fiona Apple also have expressed their own gripes with the award show.

Watch the music video above and catch up on all the lyrics to The Weeknd’s “Save Your Tears” on Genius now.