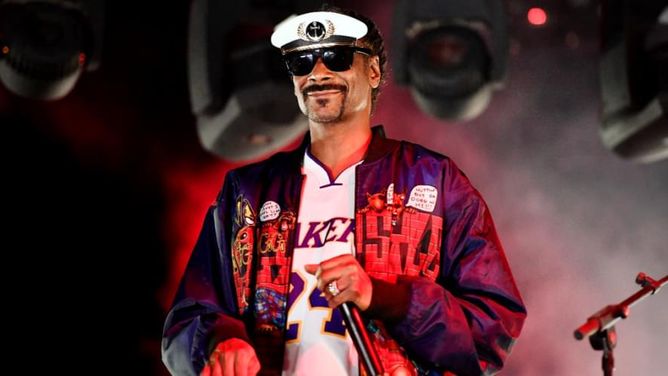 Over the past few weeks, tensions have unexpectedly flared between Eminem and Snoop Dogg after Em addressed the Long Beach rapper on his December 2020 song, “Zeus.” According to rapper Daz Dillinger (one half of Tha Dogg Pound and Snoop’s cousin), their issues may stem from a rejected feature verse.

As HotNewHipHopundefined notes, Daz was part of a discussion about the apparent beef on the app Clubhouse, alongside Royce da 5'9", N.O.R.E., Joe Budden, and more. While talking about the root cause of their problems, Daz said that Eminem once declined to appear on a Snoop Dogg album. SouthPawer caught the conversation on tape:

“Snoop was like, ‘Don’t nobody tell me no,’” Daz said. “He took it personally, and that’s why you never heard a song from Snoop and Em since then.” The two rappers have only worked together once, on 2000’s “B-tch Please II,” despite both being close with Dr. Dre. However, it’s worth noting that they were spotted in the studio together in 2019:

Tensions flared recently after Em name-checked Snoop on a song, referencing an interview Snoop gave with The Breakfast Clubundefined where he said he could “live without” Em’s music and wouldn’t put the Detroit rapper in his Top 10. On “Zeus,” Em responded:

And, as far as squashin' beef, I’m used to people knockin' meBut, just not in my campAnd diplomatic as I’m tryna beLast thing I need is Snoop doggin' meMan, Dogg, you was like a damn god to meNah, not reallyI had “dog” backwardsBut I’m startin' to think, all these people takin' shots at meSh-t, it’s no wonder

In the Clubhouse discussion, Em’s close friend and collaborator Royce da 5'9" gave his perspective on Em’s side of the story.

“He was just like, damn… the energy that was coming off of Snoop in that interview, [whether] he meant no harm or not, I think he just looked at it like, it’s a more respectful brotherly way to say what you said,” Royce said. “But I agree, it didn’t have to be a diss in a song behind it.”

Eminem recently told Shade 45undefined that it was Snoop’s tone and apparent dismissal that rubbed him the wrong way. “I think it was more about the tone he was using that caught me off guard. Cause I’m like, ‘where’s this coming from? I just saw you like, what the f-ck?’ You know what I’m saying? Like, it just, it threw me for a loop,” he explained. “Again, I probably could have got past the whole tone and everything, but it was the last statement when he said ‘as far as music I can live without, I can live without that sh-t.’ Now you’re just, now you’re being disrespectful for like, it just caught me off guard. I wasn’t ready for that.”

Thus far, it hasn’t appeared to escalate beyond the responses above. In the Clubhouse room, Joe Budden and Noreaga expressed a hope that it would stay that way.

Catch up on all the lyrics to Eminem’s “Zeus” on Genius now.