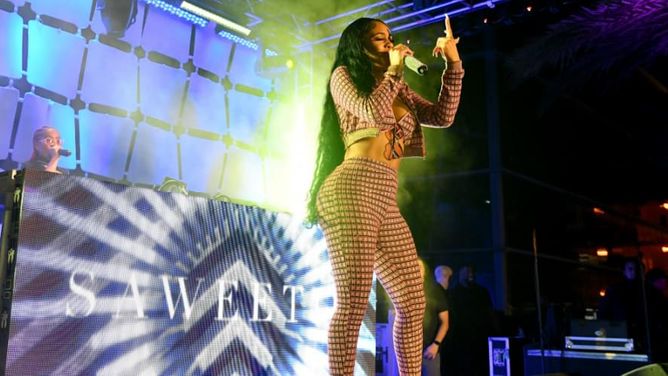 Saweetie first blew up with her song “ICY GRL” back in 2017, but fans are still awaiting the release of her debut album. In the years since she’s dropped EPs like High Maintenence and ICY, and is now in the process of readying her debut, Pretty B.-.T.C.H. Music.

With buzz around the Bay Area rapper continuing to grow, she’s initiated the rollout of her Warner Bros-backed first album with recent singles like “Tap In,” “Back to the Streets,” and “Best Friend.” Genius rounded up everything we know about Pretty B.-.T.C.H. Music to help keep fans abreast of the latest developments.

There is no official release date for Pretty B.-.T.C.H. Music yet, but it is expected to drop in 2021.

Saweetie has a trio of singles that are all likely to appear on the album. She scored a Hot 100 hit with the Too $hort-sampling “Tap In” last year, giving her career a new burst of momentum:

She then linked up with Jhené Aiko for “Back to the Streets,” an R&B kiss-off anthem that helped diversify her sound:

In January 2021, the rapper grabbed her real-life friend Doja Cat for “Best Friend.” The song has already proven to be extremely popular, earning over 100,000 pageviews on Genius and 19 million YouTube views in less than one week:

Two Saweetie’s singles (“Tap In” and “Best Friend”) are produced by Dr. Luke, the star-making pop producer who spent years blackballed from the industry after Kesha accused him of sexually assaulting her. Courts have primarily ruled in Luke’s favor, and in recent years, he’s worked with artists like Kim Petras, Tyga, Azealia Banks, and Doja Cat.

“Back to the Streets” is produced by MTK (Producer), Federico Vindver, Angel López, DRTWRK, and Timbaland

Saweetie previously explained the project’s title acronym to Paper Magazine, saying “‘B’ means bossed up or bossy. ‘I’ means independent. ‘T’ means tough because you have to be a tough individual to survive in the music game. ‘C’ is for creative. Then, ‘H’ is for hyphy because I am from the Bay.”

She told HypeBae about the inspirations she’s drawn from as she works on it.

“The key inspirations behind my new album was being a boss, getting money, loving my family, talking about them more and also just exploring my Filipino roots again,” she said. “I wanted to do something that highlighted the Filipino culture because I have a couple lyrics that are in Tagalog so I think that’s cool.”

In an interview with Teen Vogue, Saweetie explained that she is trying to define herself as an artist with this release. “This will be my introductory album into the rap game, this is all of me. I have put so much time and work in perfecting this debut album and collaborating with the right people. All I can say is it will be my true artistry.”

She told Variety that this means moving away from hits based on samples, like “Tap In” or “My Type.”

Genius will continue to update this post as more information becomes available.