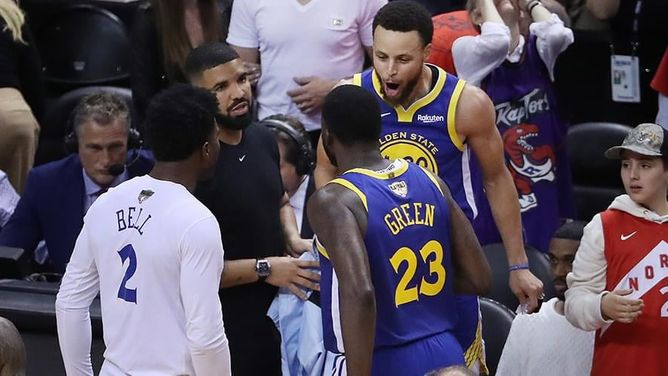 NBA fans and Golden State Warriors diehards likely recall the role Drake played during The Toronto Raptor’s 2019 championship run. Drake has served as the Raptors' global ambassador since 2013. During the NBA Finals between Toronto and Golden State, Drake was a major presence on the sidelines, cheering on the Raptors while trolling players like Draymond Green and Steph Curry.

Despite his antics, Drake is friendly with both Green and Curry. Over the weekend, as the Warriors faced off against the Raptors, Steve Kerr recalled the time he fined Drake, as well as Curry and Green, $500 for being late to the team plane.

Years ago, we were flying to L.A. after our home game. … And Steph and Draymond weren’t on the plane at the departure time … And Steph said, ‘Oh my fault, I’m with Drake and Draymond, we’re at the arena still.’ … We had a team rule at the time that you could bring a friend on the plane a couple times a year. And unbeknownst to me, Steph decided to use one of his slots for Drake. So Drake got on the plane that night with Draymond and Steph, and I fined all three of them for being late. And Drake paid his $500 fine.

In a postgame conference with reporters, Curry confirmed the story.

“We got stuck in the Oracle parking lot … headed to L.A. on a back-to-back, and me and Draymond were definitely late,” said Curry. “Just chopping it up with Drake in the parking lot. I think he put it in a song, him taking the team plane from Oracle.”

The song Curry is referring to is “Free Smoke,” a 2017 cut off Drake’s More Life. On the song, Drake raps about taking the plane and also mentions former Warriors player Kevin Durant:

I know the question rhetoricalI took the team plane from OracleMama never used to cook muchUsed to chef KDNow me and Chef, KDBet on shots for twenty G’s

That wasn’t the only time Drake has mentioned his friendship with Curry in his lyrics. On his song “0-100 / The Catch Up,” Drake rapped:

And I blame all my day onesYou know Chubbs like Draymond

More recently, Kevin Durant made a cameo in the music video for “Laugh Now, Cry Later.”

“Free Smoke” wasn’t the first time one of his bold claims turned out to be true. Last year he made headlines claiming he used to date SZA, a surprising fact the singer later confirmed.

Catch up on all the lyrics to Drake’s biggest hits on Genius now.