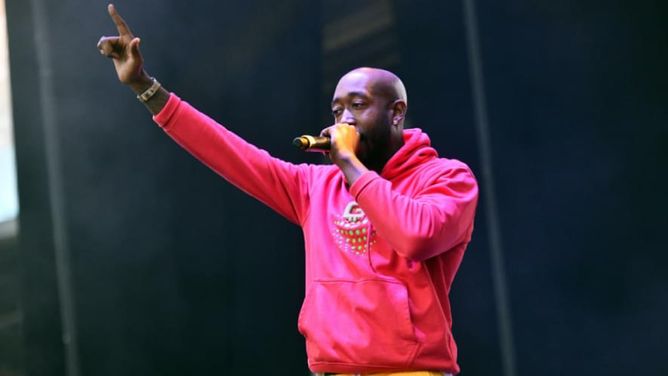 Freddie Gibbs is 38 years old and still watching himself reach new career peaks. The veteran rapper, who is up for a Best Rap Album Grammy at the 2021 show, recently linked up with Vultureundefinedundefined to discuss his 2020 achievements, and he reflected on the challenge and reward of achieving career longevity in rap music.

While he didn’t find it hard to get a record deal, Gibbs explained that finding stable success in hip-hop took much longer.

“I never worked hard to get signed. I got signed after probably a year or two of even rapping. I didn’t really know what that was to be signed or none of that,” he said. “I got dropped in six months. That sh-t came and went very quick. I had to learn how to become my own machine.”

He noted that the long path to fame taught him the value of patience.

“My path to where I’m at is very unique, probably quite different than a lot of other people. I had to fall flat real quick, and then learn how to take some years and time and a whole lot of effort to get where I’m at,” he said. “If you would’ve told me 10 years ago that I was going to have to wait 10 years to be Grammy nominated, I don’t know if I would have kept rapping. But that’s me and my young mind. I would have been like, ‘Damn, I got to do this sh-t 10 more years?’ The years in between are all learning years. I wasn’t ready for the stage that I’m on right now, back then. But now I’m ready for it.”

Gibbs' career dates back to the early 2000s, with his first mixtape, Full Metal Jakit, Vol. 1, dropping in 2004. After appearing the 2010 XXL Freshman class alongside rappers from J. Cole and Wiz Khalifa to Fashawn and Donnis, he released his major debut album, ESGN, in 2013. He found critical acclaim alongside Madlib with their collaborative albums Piñata (2014) and Bandana (2019).

Despite the journey, Gibbs expressed gratitude for the slow-burning success compared to some of his early peers.

“Motherf-ckers feel like if they don’t make it by 22, they dead,” he said. “I’d rather have it later in life than get it quick and then lose it all. I know a lot of rappers that were popping 10 years ago when I was trying to get it popping, and now they gone. A lot of those guys probably can’t go do a show nowhere; a lot of them probably don’t own their masters; a lot of them probably ain’t getting no money off streams or whatever; a lot of them probably signed with somebody who can’t put out a project. It’s all about longevity for me.”

Gibbs is competing for Best Rap Album at the March 2021 Grammys ceremony for his The Alchemist collaborative project, Alfredo. The project earned both artists the highest-charting debut of their careers, landing at No. 15 with 31,000 equivalent album units sold in its first week.

Read Freddie Gibbs' full Vulture interview here and catch up on all the lyrics to Alfredoundefined on Genius now.