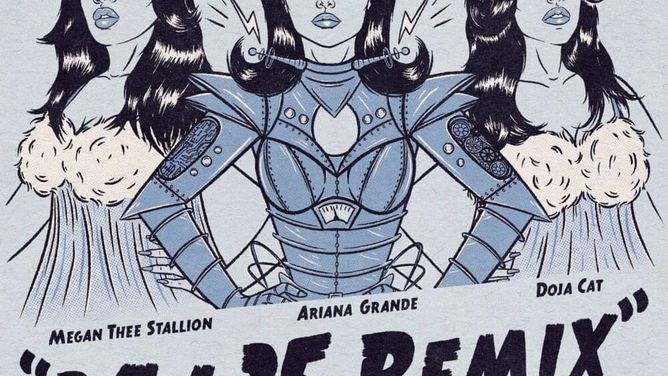 Ariana Grande’s playfully sexual “34+35” sits at No. 13 on the Billboard Hot 100 chart this week, and it’s poised to get a nice boost thanks to the release of a star-studded remix featuring Doja Cat and Megan Thee Stallion. The two rappers, who went head-to-head last year in competition for the No. 1 spot on the Hot 100 chart, join forces for the first time as they both add verses to Ari’s bubbling hit.

Add up the numbers or get behind thatPlay and rewind that, listen, you’ll find thatI want that 69 without TekashiAnd I want your body and I make it obvious

“34+35” is produced by TBHits, Peter Lee Johnson, Mr. Franks, and Xavi. It previously peaked at No. 8 on the Billboard Hot 100 chart the week of its release last year. Fans will have to wait and see whether Megan and Doja’s remix can help push it even higher.