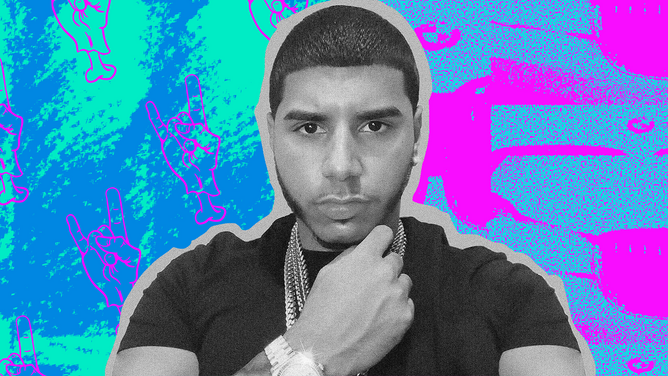 Staten Island rapper CJ dropped his single “Whoopty” in late July 2020. Six months later, it’s on the precipice of becoming a Top 20 hit, with 170 million Spotify streams and 116 million YouTube views. But while he seems to have come out of nowhere to score a major hit, the road to success wasn’t simple.

The 23-year-old rapper had a handful of songs to his name before the release of “Whoopty,” including a pre-snitching collaboration with Brooklyn firecracker 6ix9ine called “Pop.” But “Whoopty” hit like none of his previous releases, perhaps because of his pivot to the popular drill sound of his city.

The song’s beat is by Cyprus-based producer Pxcoyo, and samples “Sanam Re,” a Bollywood song by Mithoon & Arijit Singh. Although he noted that using the beat wasn’t a great decision on the “business side,” CJ quickly crafted a burgeoning drill hit.

After dropping the song’s music video in July, he uploaded it to commercial streaming services in late August. According to CJ, the song earned over one million streams within the first month, the first signs of fan interest far beyond what he had previously experienced. Some of the initial interest likely came from the “Sanama Re” sample, which was already well known in the drill scene thanks to “Exposin Me”—a 2018 song by Chicago rapper Memo600 that was later remixed by artists like King Von and the late Pop Smoke.

Despite the initial success, “Whoopty” wasn’t transcribed on Genius until September 22, and had only amassed 12,000 pageviews by the end of that month.

As is often the case, TikTok helped bring things to the next level. A dance challenge featuring “Whoopty” took off in October, leading to the creation of nearly 900,000 videos using the song’s audio.

Fans focused not on the chorus, but the song’s first verse and bridge, where CJ mixes slang like “zaza” with Bangla words like “māthā” (head) and Spanish words like “lata” (can):

Smokin' the Zaza, it goes straight to the māthāThen I’m uppin' the choppaI’m hittin' the cha-cha, open his lataThen he dancin' bachata

By the end of October, the song would hit more than 7,000 daily pageviews on Genius. In mid-November, it debuted at No. 97 on the Billboard Hot 100 chart, the start of a nine-week run that would bring it to No. 21 (and climbing). CJ told Genius that he thinks the song connected by staying true to New York’s popular drill sound at a time when people needed something to get excited about.

“Whoopty” saw daily pageview activity peak on Genius in early December, where it amassed more than 130,000 pageviews in a seven-day span between November 28 and December 4 just after he appeared on Verified:

Genius activity has decreased since then, but “Whoopty” continues to rise up the Hot 100 chart and CJ recently inked a major label record deal with Warner Bros. With his single still on the rise and a firm grasp on the popular sound of his city, CJ looks poised to step into his own.

Read all the lyrics to CJ’s “Whoopty” on Genius now.