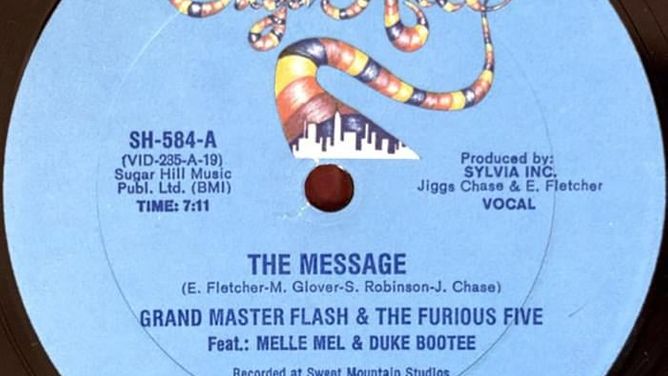 The average hip-hop fan may not know who Duke Bootee is, but they should. The hip-hop pioneer was one of the main forces behind the Grandmaster Flash & The Furious Five’s seminal hip-hop record, “The Message.” Although he was not a member of the group, Bootee wrote and performed the majority of the song. Born Edward Fletcher, Bootee died of congestive heart failure last week at his home in Savannah, Georgia. He was 69.

Prior to “The Message,” Duke Bootee played in the house band for Sugar Hill Records—the label where Grandmaster Flash & The Furious Five were signed. The label’s head, Sylvia Robinson, wanted to make a serious rap song about what was happening in society. In 1980, Duke Bootee wrote the song, inspired partly by the New York City transit strike. But when Robinson brought the song to the group, they weren’t interested.

In a 2013 interview with The Guardianundefined, the song’s producer Jiggs Chase noted how Melle Mel was the only member of the group who contributed to the song.

“Ed did all that except for writing the final one, which was done by Melle Mel,” said Jiggs Chase. “He was the only member of Grandmaster Flash and the Furious Five who actually had anything to do with the song, even though the band got the credit. Melle was the best rapper in the group, too, but Ed still had to show him how to do it.”

It’s worth noting that Melle Mel didn’t actually write his last verse, he recycled one of his old verses from the song “Superrapping.” In a Genius Verified Annotation, Rahiem of The Furious Five noted how each member auditioned to record the verses Bootee had written, but it was his idea to reuse an old Melle Mel verse.

In a 2015 interview, Scorpio of the Furious Five claimed Grandmaster Flash contributed nothing to the song, going so far as to compare him to Milli Vanilli. He added, “The biggest mistake the Furious Five made was to leave his name before ours.”

“Grandmaster Flash himself wasn’t on the song,” added Duke Bootee, to The Guardianundefined. “He didn’t think people wanted to hear that sh-t. Melle Mel was so mad about that.”

“The Message” was released in 1982 and became an instant hit, peaking at No. 62 on the Billboard Hot 100 and (according to Bootee) going gold in eleven days. But it’s cultural impact goes far beyond chart position; it’s often cited as one of the greatest rap records of all time.

It was one of the first rap records to address social issues, laying the groundwork for artists like Public Enemy, 2Pac, and Kendrick Lamar. Questlove once explained the song’s importance, writing, “Hip-hop was once known as party fodder, a fad. ‘The Message’ pulled a 180 and proved it could be a tool of sociopolitical change.”

The song’s lyrics and beat have been sampled in over 200 rap songs. Diddy sampled the beat for “Can’t Nobody Hold Me Down” as did Ice Cube on “Check Yo Self (The Message Remix).” Countless rappers have quoted the opening lyrics, which Bootee wrote and rapped:

Don’t push me ‘cause I’m close to the edgeI’m trying not to lose my head (Say what?)It’s like a jungle sometimesIt makes me wonder how I keep from goin’ under

Thanks to its influence and impact, “The Message” became the first rap record entered into the National Recording Registry. It’s also one of the main reasons Grandmaster Flash & The Furious Five became the first rap group inducted into the Rock and Roll Hall of Fame in 2007. However, despite clearly being credited on the vinyl records, as both Duke Bootee and E. Fletcher, Duke Bootee was not inducted into the Hall of Fame with them.

After falling back from the music business, Fletcher found his way into the education world. He became a high school teacher and college professor, and served as a lecturer on Critical Thinking & Communication at Savannah State University before retiring in 2019.

Read all the lyrics to “The Message” on Genius now.