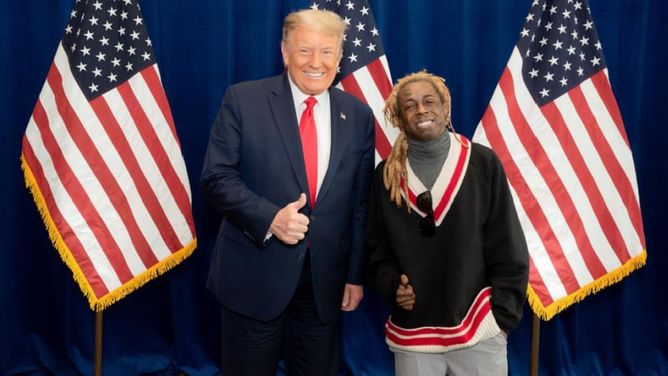 Wayne (real name Dwayne Carter) took heat for appearing with Trump during the 2020 Presidential Campaign. He was facing up to 10 years in prison after pleading guilty to illegal possession of a loaded weapon while on a private plane to Miami last year. He was granted a full pardon.

Kodak Black (real name Bill Kapri, formerly known as Dieuson Octave) has faced a series of gun and sexual misconduct charges since his rise to prominence. He is currently serving a 46-month prison sentence after pleading guilty to making false written statements in an attempt to buy a firearm. He is concurrently serving a separate sentence after attempting to re-enter the United States from Canada with a firearm. Kodak’s lawyer, Bradford Cohen, was a contestant on Trump’s reality show The Apprenticeundefinedundefined in 2004.

Michael Harris will be freed after serving 32 years for attempted murder and cocaine trafficking. The Daily Mail reports that Snoop Dogg (who rapped under Death Row in his early career) played a pivotal role in lobbying Trump and his family to commute Harris' sentence, which was due to last until 2028.

The White House released statements explaining all three pardons. Read them below:

Dwayne Michael Carter Jr. – President Trump granted a full pardon to Dwayne Michael Carter Jr., also known as “Lil Wayne.” Mr. Carter pled guilty to possession of a firearm and ammunition by a convicted felon, owing to a conviction over 10 years ago. Brett Berish of Sovereign Brands, who supports a pardon for Mr. Carter, describes him as “trustworthy, kind-hearted and generous.” Mr. Carter has exhibited this generosity through commitment to a variety of charities, including donations to research hospitals and a host of foodbanks. Deion Sanders, who also wrote in support of this pardon, calls Mr. Wayne “a provider for his family, a friend to many, a man of faith, a natural giver to the less fortunate, a waymaker, [and] a game changer.”

Bill K. Kapri – President Trump granted a commutation to Bill Kapri, more commonly known as Kodak Black. Kodak Black is a prominent artist and community leader. This commutation is supported by numerous religious leaders, including Pastor Darrell Scott and Rabbi Schneur Kaplan. Additional supporters include Bernie Kerik, Hunter Pollack, Gucci Mane, Lil Pump, Lil Yachty, Lamar Jackson of the Baltimore Ravens, Jack Brewer formerly of the National Football League, and numerous other notable community leaders. Kodak Black was sentenced to 46 months in prison for making a false statement on a Federal document. He has served nearly half of his sentence. Before his conviction and after reaching success as a recording artist, Kodak Black became deeply involved in numerous philanthropic efforts. In fact, he has committed to supporting a variety of charitable efforts, such as providing educational resources to students and families of fallen law enforcement officers and the underprivileged. In addition to these efforts, he has paid for the notebooks of school children, provided funding and supplies to daycare centers, provided food for the hungry, and annually provides for underprivileged children during Christmas. Most recently while still incarcerated, Kodak Black donated $50,000 to David Portnoy’s Barstool Fund, which provides funds to small businesses affected by the COVID-19 pandemic. Kodak Black’s only request was that his donation go toward restaurants in his hometown.

Michael Harris – President Trump commuted the sentence of Michael Harris. Mr. Harris is a 59 year old who has served 30 years of a 25 year to life sentence for conspiracy to commit first-degree murder. Mr. Harris has had an exemplary prison record for three decades. He is a former entrepreneur and has mentored and taught fellow prisoners how to start and run businesses. He has completed courses towards business and journalism degrees. Upon his release, Mr. Harris will have a meaningful place of employment and housing with the support of his family.