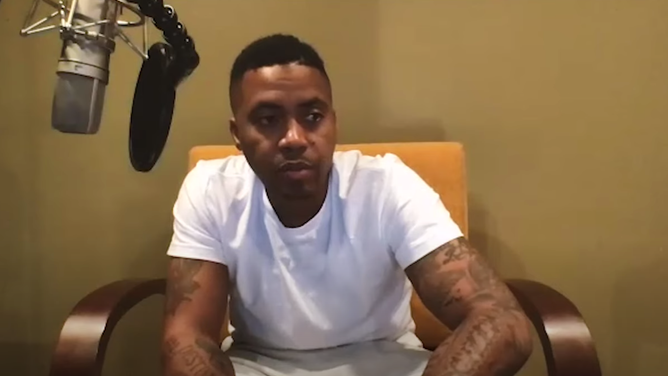 Nas Reflects On Battling Jay-Z: “I Was Honored To Have That Part Of My Life”

Nas was the latest guest on Rick Rubin’s Broken Record podcast, and the Queens rapper reflected on his legendary career and recalled his infamous battle with JAY-Z.

“The art of emceeing was right there on full display,” said Nas, when asked about the rivalry. “It was like, if you’re in the rap game, this could happen, a battle. It was like, ‘This rap thing is real. A battle could really happen.’ So I was honored to have that part of my life happen because that’s how I saw the greats do it coming up.”

A cold war brewed between the two rappers throughout the late ‘90s as they competed for New York rap supremacy, and finally exploded into an all-out battle in 2001 with Jay-Z releasing “Takeover” and Nas responding with “Ether.” A slew of other diss records and jabs flew back and forth, but the two icons eventually squashed things in 2005 live on stage at the I Declare War concert. Despite being friendly for longer than they were rivals, debates between rap fans about who bested who still rage.

During the podcast, Rubin mentioned that the battle actually shed light on both rappers, despite the bad blood. Nas responded, underscoring how battle rap is unique to hip-hop and keeps the genre lively.

“Again, it’s about the art of emceeing,” said Nas. “And when you’re trying to make the best stuff you can make, and you bump heads with another MC, and then you guys have a war or whatever, that’s what this art form was since the beginning. Since Double Trouble and Busy Bee and Kool Moe Dee. But that’s what I like about hip-hop compared to other genres is that they go at it in hip-hop. You know, like, really at it. Not to say that other rockers didn’t go at it, other reggae artists didn’t go at it, other crooner didn’t go at it, but hip-hop will always be around because of how competitive it is.”

Listen to the full episode here.