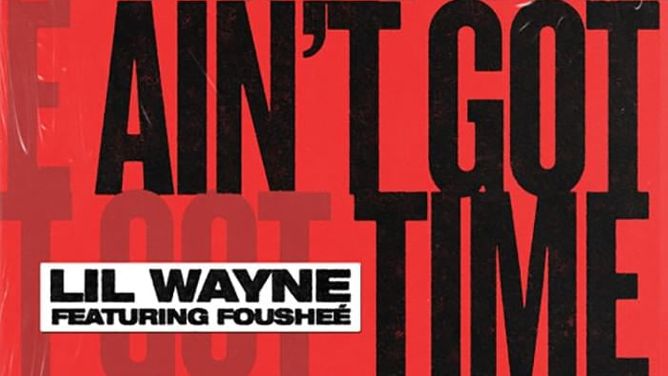 Fresh off securing a pardon in the closing hours of the Trump administration, Lil Wayne released a new song featuring Fousheé titled “Ain’t Got Time” where he details some of the circumstances that led to his arrest.

On the song’s first verse, Wayne raps about federal agents raiding his private plane, while also shouting out the late Juice WRLD:

The feds, they hot on us, one hundred on the thermometerThey raided my private plane, I went got one that’s more privaterR.I.P. Juice WRLD, wrote that on two cupsCuz pour out a lil' juice for him, shit gave me goosebumps

Last December, the 38-year-old Lil Wayne was charged with criminal possession of a firearm and ammunition as a prior felony offender in Miami. Federal agents caught the New Orleans rapper with a gold-plated .45-caliber handgun in his luggage, as well as MDMA, weed, cocaine, and heroin—though he did not face any drug charges.

Wayne’s shoutout to Juice WRLD was likely deliberate. Similar to Wayne, Juice’s private plane was also raided by federal agents back in December 2019. Juice’s team claimed the rapper swallowed several pills to hide them from investigators, which may have led to his untimely death.

In the song’s second verse, Wayne claims the FBI was just messing with him.

FBI arrest me, why?They can’t nail me so they just screwin' me

Wayne pled guilty to the gun charge and faced up to 10 years in prison but he was pardoned by President Trump before sentencing. Wayne had endorsed Trump in October 2020 during Trump’s presidential campaign. However, Wayne’s lawyer—who also represents Kodak Black and was once a contestant on The Apprentice—Bradford Cohen denied Wayne’s support of Trump led to his pardon.

On the song, Wayne also alludes to an impending jail sentence in the context of a relationship:

Got too much on my mind, think about too muchSaid, “It’s our time to shine,” then the clouds blew upShe said, “You better lock me down ‘fore they lock you up”

Wayne has been dating model Denise Bidot, but the two were rumored to have broken up after Wayne’s Trump endorsement. However, they have since reconciled.

Read all the lyrics to Lil Wayne’s “Ain’t Got Time” on Genius now.