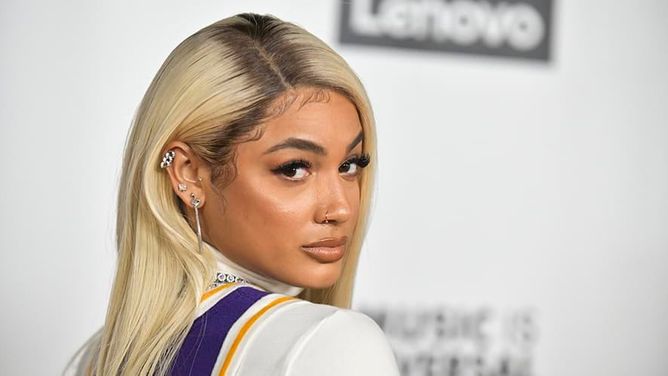 DaniLeigh hasn’t even released her song “Yellow Bone” yet, but it’s already attracting controversy. The Def Jam singer previewed her song yesterday in a video on her Instagram with the caption “YELLOW BONE THATS WHAT HE WANT,” using a term that refers to light-skinned or mixed-race Black women.

After receiving some backlash in her comments section for colorism, she defended herself in the comments writing, “Why I can’t make a song for my light skin baddies?? Why y'all think I’m hating on other colors when there are millions of songs speaking on all types… Why y'all so sensitive & take it personal… Gahhhh damn.” Later, she deleted the video promoting the song.

When she received even more backlash on Twitter, she posted a series of tweets defending herself before disabling her Twitter. HotNewHipHop managed to screengrab Leigh’s tweets.

Part of the backlash stems from the fact DaniLeigh is of Dominican descent and has previously denied being Black. The phrase “yellow bone” is considered a loaded term in the Black community, as writers like Sarah Osei and rappers like CHIKA have pointed out.

Another factor in the backlash may be Leigh’s romantic relationship with DaBaby. MeMe, DaBaby’s ex and the mother of one of his children, also chimed in making fun of the song—she and Leigh have exchanged jabs on social media previously.

My b-tch is Mello Yello like a soda (Soda)

Beyond DaBaby and DaniLeigh, the term “yellow bone” has appeared in at least 400 songs, according to Genius data. While the vast majority of them were in rap songs by men, the most notable example was the hook to Beyoncé’s “Formation” where she sings:

I see it, I want it, I stunt; yellow bone-itI dream it, I work hard, I grind ‘til I own it

The second most popular example was from last year, Young Thug used the term on Travis Scott’s No. 1 hit “FRANCHISE” when he rapped:

It’s unclear if DaniLeigh still intends to release the full version of the song.