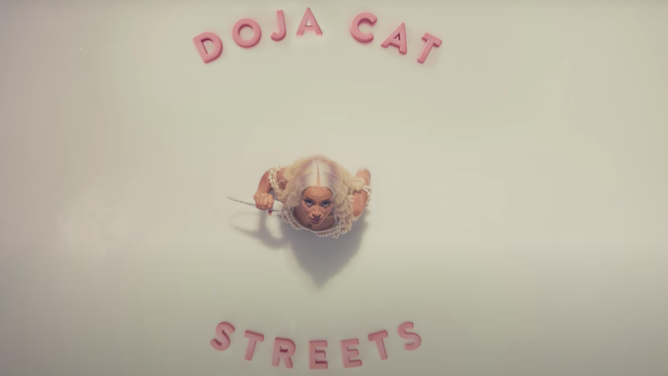 Doja Cat is starting to initiate the rollout of her new album, Planet Herundefined, but a song from 2019’s Hot Pink is taking on a life of its own. “Streets” was originally meant as an album cut, but has racked up nearly 60 million Spotify streams and recently made its Hot 100 debut thanks to a TikTok trend. The track kicks off with a smooth R&B sample taken from B2K’s 2003 soundtrack for the film You Got Served.

Genius user rihannas breaks down the sample in an annotation:

TikTok users utilize the song, along with a vocal snippet of Nicki Minaj saying, “I don’t think you understand, I’m obsessed,” to soundtrack videos about their crushes and obsessions. Well over 100,000 videos using the song now exist on the platform:

Although Doja hasn’t given “Streets” a traditional video treatment or single promotion, she did release a special VEVO Lift performance in March of last year:

The newfound interest helped “Streets” debut at No. 91 on the Billboard Hot 100 chart this week, marking the fourth Hot Pink song to chart after “Say So,” “Juicy,” and “Like That.” Other Hot Pink tracks like “Cyber Sex,” “Rules,” and “Bottom B-tch” have also gotten music videos and single pushes, showcasing the album’s remarkably long legs well over a year after it dropped.

Read all the lyrics to Doja Cat’s “Streets” and B2K’s “Streets is Callin'” on Genius now.