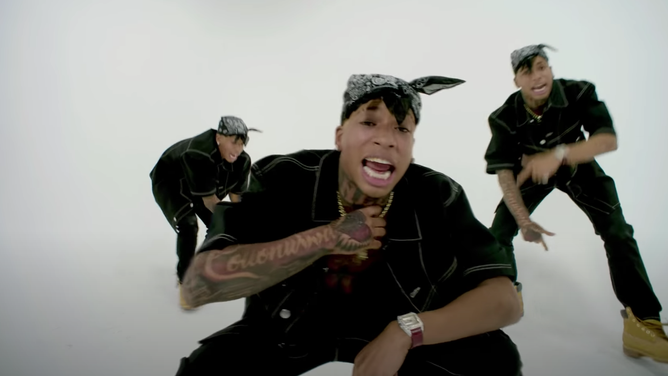 NLE Choppa Pays Homage To 2Pac With “Picture Me Grapin”

NLE Choppa’s “Picture Me Grapin” is a full-on tribute to the late 2Pac. Despite being born in 2002—six years after 2Pac’s untimely death—the Memphis rapper channels 2Pac’s music and his iconic looks with his latest song and video.

In addition to flipping the beat to 2Pac’s “Picture Me Rollin',” NLE recreated scenes from 2Pac videos like “Hit'Em Up” and “I Get Around” as well as infamous moments like spitting on cameras in front of a courthouse.

Although he used the beat from “Picture Me Rollin',” NLE flips the hook from 2Pac’s “All Eyez On Me” on the chorus, rapping:

I live the life of a top shotta until the day I dieYeah, you know I’m a thug, nigga, but I'ma still cryWe ain’t doin' no drive-bys, I look him in his eyeStand over with this fire and I'ma watch that nigga die

The music video for “Picture Me Grapin” has already amassed nearly 2.5 million views after dropping on Friday. However, according to NLE, it might be his last release. Last week, he claimed he was having issues with Warner Bros Records in a series of tweets so he won’t be dropping more music.

NLE isn’t the only rapper from the new generation influenced by 2Pac. Last year, [Polo G]’s “Wishing For A Hero” shared a sample with 2Pac’s “Changes” and also paid homage to the late rapper.

Read all the lyrics to NLE Choppa’s “Picture Me Grapin” on Genius now.