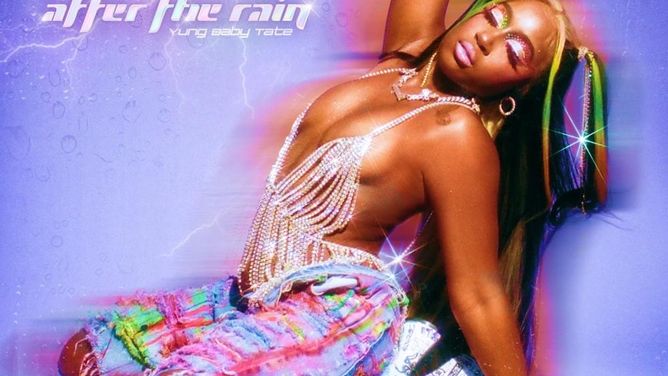 Interview: Yung Baby Tate Breaks Down Her Bubbling TikTok Hit “I Am” & Discusses The Power Of Manifestation

Atlanta rapper Yung Baby Tate is no stranger to social media virality, whether she’s teaming up with Ashnikko for “STUPID” or doing a spot-on impression of Vice President Kamala Harris. But her new song, “I Am,” finds her racking up streams on a song that’s all her own.

The Flo Milli collaboration is a big hit on TikTok, with more than 150,000 videos on the platform utilizing her 2020 track. This includes Ms. Harris' niece, author Meena Harris, who earned over two million views on a recent video featuring the Vice President set to Tate’s track. With over five million Spotify streams (and counting), it’s Tate’s most successful solo song to date, and the trend that’s brought it to popularity is cultivating a conversation about the importance of self-affirmation and manifestation as users exclaim Tate’s lyrics: “I am healthy. I am wealthy. I am rich. I am that b-tch.”

Genius recently caught up with the rapper about her burgeoning hit, navigating life as an independent artist, and speaking her dreams into existence.

This interview has been lightly edited for length and clarity.

Genius: To start off: what does it feel like to see “I Am” gaining traction online?

Yung Baby Tate: I’m feeling amazing. This is my biggest song to date so far. And I’m just feeling blessed, feeling grateful every day that I wake up and see it doing more and more and getting bigger and bigger. But really I’m just mostly grateful that the song is actually resonating with people, the lyrics themselves, because at the end of the day, it’s about how much I’m able to impact somebody’s life. And I think that this song has really been doing that for people.

When did this song first come together?

I wrote the chorus just at my house. It was just some affirmations that I wanted to write down, but when I wrote them down it was in a little rhyming, poem type thing. When I finally took it into the studio, it was actually the new moon of September, which is interesting. I don’t think I did this on purpose, but new moons are often used for manifestation. We were going through some beats and I was like, “You guys, I got this chorus I really want to put on this song. We just got to find the right beat for it.” And we ended up finding this beat that Slade Da Monsta had sent over and I rapped the chorus over it. And it was like, “Oh yeah, this sh-t is hard.”

Are you a big believer in that self-affirmation, manifestation, speaking things into existence kind of vibe?

Absolutely. I think that the power of manifestation is really real because the power of mind is real. If you think that you’re worthless and you’re a piece of sh-t and you keep saying these things, it’s going to start to manifest in your life physically, emotionally, mentally. But if you think positively, if I think, “Yo I’m at a b-tch, I’m so confident, I’m this, I’m that.” It starts to show on the outside. But it all starts on the inside in your mind. So I’m, I’m definitely a super firm believer that manifestation is absolutely real. It takes work, but it starts in the mind.

The song has taken off on TikTok and there’s this self-affirmation trend that goes along with it. What does it mean to you to see people using that and channeling your manifestations as a way to express self-love and confidence in themselves?

It feels so great. Literally, every time I check TikTok and I see a new video, I’m just smiling. Sometimes I’ll get a little teary-eyed because I really do see people actually using this. I see it impacting their lives. I’ll read comments and they’re like, “Yo, I played this song every morning. And now all of the jobs that I applied for, they call me back immediately.” And whether or not it was my song that made that happen, it was just the belief. “I’m going to go get that bag” or “I’m going to do this. I’m going to do that.” And by just me saying, “Say these things to yourself,” it changed the way that people are thinking. And it’s a blessing, honestly. I’m just excited.

I know you’re friends with Flo Milli. How did she get involved in the song?

So, we were thinking about features for After The Rain. Initially, I think we were going to have no features on this entire project, but we were like, “Well, let’s be creative. If we were to get some features, who would it be?” And I was thinking about “I Am” and I was like, “You know who would be super dope on this? Flo Milli.” And a lot of our fans kind of overlap and a lot of our fans have said in the past, “Oh my gosh, you guys need to collab. I can’t wait for you guys to collab. Collab. Collab.” So when I was like, “Yeah, I think she would be dope.” I just hit her on Instagram. I was like, “Yo sis, I got this song. I think he was sound crazy on.” And we just sent it over. And that was that

It changed the way that people are thinking. And it’s a blessing,[object Object] — Yung Baby Tate

You also shout out being independent. I know you’ve been a proudly independent artists for a while now. What is your stance on record labels these days?

Right now I am independent and I’m really proud of the fact that I’ve been able to accomplish so much independently. And I think I’ve always told myself, “I just want to go as far as I can on my own.” If I can make it on my own, I want to keep doing that for as long as I can.

If I were to sign with a major label, I would want it to just be the dream deal for me. Continuing to have ownership of the things that I create and continuing to have creative control and things like that. So, for me, a major label is not completely ruled out for my future, but like I said, I’m doing pretty well right now.

What has your experience been like so far, you working with Issa Rae’s label Raedio?

It’s been great. Honestly, I’m really happy I made the decision to work with them. 2020 was obviously crazy. So, a lot of the things that we have planned for last year didn’t come to fruition. But now things are starting to move again. And it’s really exciting to be a part of a label that wants its artists to not just be artists, but to be everything. I’ve gotten a lot of different auditions for sh-t just through working with Raedio, and acting is something that has always been a passion of mine. So I just feel blessed to be working with them.

This isn’t your first time seeing a song get popular either through TikTok or social media. “Stupid,” blew up that way. “Babytron,” blew up in that way. How do you approach social media as a marketing tool in 2021?

This definitely happened organically. People just started making videos to it. But I think it’s sort of an afterthought. I don’t go into the studio, like, “All right guys, we got to get a TikTok moment right there.” But I think that sometimes we might create something and I’m like, “Oh, this would go up on TikTok or this would do this.” But in the end it’s really just about making good songs, whether they blow up on TikTok or not. And I just want to continue to be a part of dope music moments.

Is there anything else you want to say about the song?

The video will be coming soon. I’m excited about that. And yeah, just keep streaming every morning. Get your affirmations in, baby. And the deluxe for After The Rain is coming soon as well. And I’m just excited to continue moving forward. We are only in January right now. So 2021 is looking pretty great and I’m excited for it.