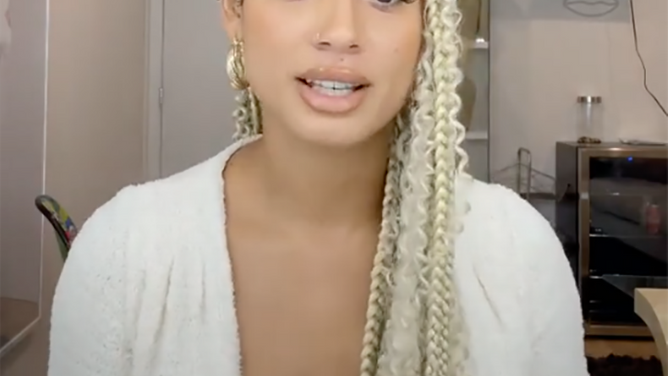 Over the weekend, DaniLeigh apologized after receiving intense criticism for her song “Yellow Bone.”

Last week, the Def Jam singer was facing a huge backlash after previewing the unreleased track. Fans accused Leigh, who is dating DaBaby, of being a colorist for promoting a song using the term “yellow bone,” which is typically used to refer to light-skinned or mixed-race Black women.

In the clip, which is no longer live on her Instagram, she says:

“Hey guys, it’s DaniLeigh. I just wanted to address what’s going on with me right now. I think it’s super important, because I definitely feel super misunderstood. My song ‘Yellow bone is what he want,’ I think people twisted it into thinking, like, I’m trying to bash another woman, another skin tone, that was never my intention. I wasn’t brought up like that, I never looked at my skin as a privilege. I never looked at me as ‘I’m better than somebody because of my skin tone.’I see brown skin women flaunt their skin all the time in music, why can’t I talk about mine? If you look at me, I’m light-skinned, I’m a yellow bone. In my opinion, that’s just what I am. So, it wasn’t something that I looked at so deeply. Which, I can see why people will take it deeply, so I understand and I’m sorry that I wasn’t sensitive to the topic when I wrote my comment ‘why are you guys taking so personal?’ Because, it can be a personal thing to certain people, because colorist is a real thing so I do get it. But I’m not that. I’m not a colorist. I’m not a racist. I date a whole chocolate man. I have beautiful dark-skinned friends.Skin isn’t something I even see, it’s not something that I look at. I don’t live for the internet because people don’t know me. So that’s why I thought it was important to speak on because you don’t know me, it’s like, let me tell you guys what I meant by this. Hopefully, you guys can watch it with an open heart, a genuine mind, and try to get past it. I’m sorry, again, if I offended people—who are truly offended—I’m sorry. I’m going to just keep grinding, keep doing me, keep posting me. I hope everybody has a great Sunday. It’s all love.”

Despite the video, some fans on Twitter did not seem to buy her apology, pointing out how Leigh saying she has “dark-skinned friends” and is dating a “chocolate man” are still colorist remarks.