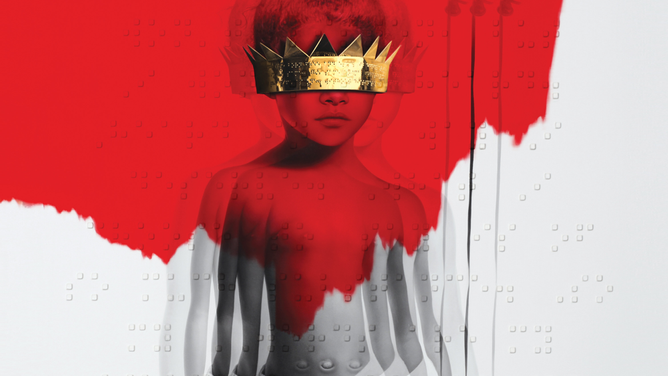 Knowledge Drop: Rihanna’s ‘ANTI’ Cover Was Inspired By A Photo Of Her First Day At Daycare

Today, Rihanna’s ANTI celebrates it’s five year anniversary. The 2016 album saw the Barbadian singer take firm control over her musical output as she moved away from chasing the radio hits of her early career and focused on songs that, as she told MTV, “felt real, that felt soulful, that felt forever.”

One of the ways Rihanna was able to keep the album true to herself was with the cover art, which was designed by Israeli artist Roy Nachum. The artwork was inspired by a photo of the singer on her first day of daycare, according to multiple sources. Nachum reworked the photo, making it more abstract, before adding a gold crown over her eyes and a splatter of red paint.

While the exact photo hasn’t been conformed, several childhood photos of Rihanna bear a clear resemblance to the cover art.

Back in 2015, when Rihanna debuted the art work and announced the album’s title at a Los Angeles art galley, she explained why she wanted to work with Nachum

“He sees things beyond the surface, which is why we even decided to collaborate,” said Rihanna, according to Rolling Stone. “After we met, we talked about what I wanted visually, what would make me the happiest girl in the world. This is my favorite album cover ever…This is me as a little girl. I brought this one to him and he really reinterpreted it his own way with exactly the message that I wanted."

Nachum added that the “crown over the eyes is a symbol for the music.”

In the end, Rihanna’s plan worked as ANTI won rave reviews and still featured multi-platinum hits like “Work” and “Needed Me.” The album appeared on numerous best albums lists in 2016 and is certified 3× Platinum.

Read all the lyrics to Rihanna’s ANTIundefined on Genius now.