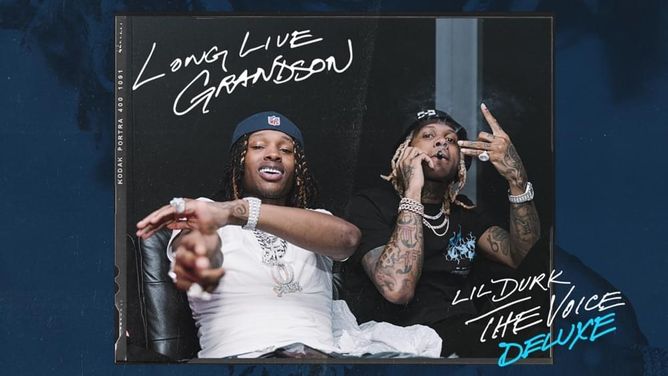 Durk makes no illusions about who he’s referencing on the song, calling out Duck directly and referencing his death:

You come outside without your gun, lil' boy, you dumb as f-ckAin’t no quick run to the store, they pop out, fire you upI told my PO through the gate that I get high as f-ckShe ask me how high do I get, I told her high as Duck

He continues by calling Duck a “goofy” and questioning his gang affiliations:

Man, he talkin' ‘bout gang in this b-tchHe ain’t get back from that one sh-t, man his gang ain’t on sh-t'Fonem posted up outside, Dracos hanging and sh-tBefore he died, his a-s a goofy, now he famous and sh-t

Durk also seems to reference a 2018 incident where rapper FBG Wooski survived being shot in the head at the funeral of a fellow rapper:

One b-tch thought I told her, “Yeah,” I said, “You better block me”He survived one to the head, but it f-cked up his bodyYou think he off a eight or red the way that n-gga noddin'?He don’t even know ‘bout drugs, he sell lean, OxyContin

Durk hinted at the direction of the song in a tweet shortly before he dropped:

Duck had issues with the late King Von, a Lil Durk signee who is featured on the cover art of The Voice and was shot and killed outside an Atlanta nightclub in November 2020. Von claimed they had squashed their beef before Duck was murdered.

Although it’s not as common to hear rappers diss the dead on wax, it’s not unprecedented. Mobb Deep’s 2Pac diss record, “Drop A Gem On ‘Em,” appeared on their album Hell On Earth in 1996 after Pac was shot and killed in Las Vegas. However, the duo had recorded the song beforehand and did attempt to pull it from radio stations.