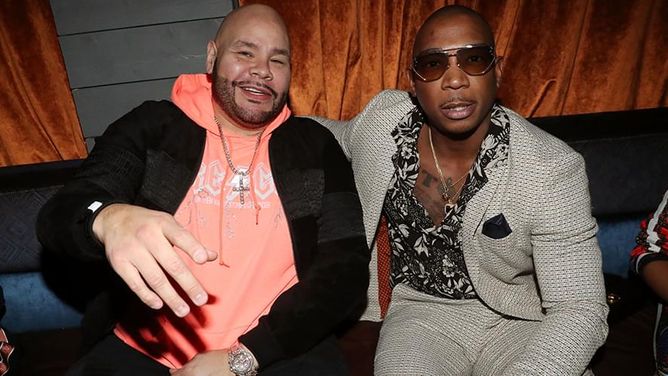 Fat Joe recently released the music video for his latest single “Sunshine (The Light),” and in the intro for the video, Diddy says something curious. While toasting to Fat Joe, alongside DJ Khaled and French Montana, Diddy praises Joe by saying, “This is Crack, one of the world’s most famous graffiti artists. He got kidnapped in Africa.”

It might sound like a bizarre brag, but it’s apparently a true story that involves an infamous promoter named Henrique “Riquinho” Miguel who’s based out of Angola. As the story goes, Ja Rule convinced Fat Joe (who never took flights) to head over to Africa in the mid-2000s to perform hits like their 2002 collaboration “What’s Luv?” On a 2019 episode of Untold Stories in Hip Hop, Ja recalled the incident to host Angie Martinez.

“We go over to Africa, we meet this dude named Riquinho. Now let me tell you who Riquinho is, Riquinho is like Idi Amin,” said Ja Rule, referring to Uganda’s former President, who was known as a brutal despot. “During the day probably slaughtering and killing people and at night he’s doing concerts, the killer concert promoter. When we got there, Riquinho kidnaps us. This is the same dude who kidnapped DMX."

According to Ja, after they did their show, Riquinho told them to stay and do more shows, more “extravaganza,” which prompted Ja to ask for more money.

“Do you know this dude kept us there for five, six days?” said Ja. “Giving us more extravaganza, more bags. But we were supposed to leave and wanted to leave. He kept giving us money to stay, but we wanted to leave…We were really kidnapped, but it was a friendly kidnapping.”

Ja and Fat Joe played more shows and safely left, but a very similar—albeit a lot less friendly—situation with Riquinho played out in 2005 with DMX and producer Dame Grease.

In a 2017 interview with 247HH, Dame Grease recalled how at the end of DMX’s European tour, they had one final stop in Angola. They were supposed to do two back-to-back shows, but the second one was moved after the first show. The promoter promised to pay them $30,000 a day to wait around for the second show, which made Grease suspicious. They were also told, in Spanish, “If you try to leave, you’re going to have a problem.”

“The promoter guy which we found out is the promoter, the airport owner, the hotel owner, the TV shop owner, and the radio station owner,” said Grease, to 247HH. “Actually, he was a warlord, as we found out afterwards.”

Eventually, DMX and Grease plotted their escape by calling up the US Embassy, who helped escort them to the airport in bulletproof white Tahoes. However, at the airport, Riquinho and a large group of armed men confronted them again. Luckily, Grease, DMX, and the rest of their crew managed to get on a flight back to the US after paying $17,000 in cash.

DMX also recalled the incident in a 2015 interview with 247HH. Though he didn’t get into nearly as much detail as Grease, he did mention how Riquinho was seemingly connected to Angola’s president.

Riquinho’s name also appeared in hip-hop headlines in 2012 when a concert promoter named Patrick Allocco claimed Riquhino kidnaped him and his son after Nas failed to perform in Angola on New Year’s Eve. According to Allocco, Nas had been paid $300,000 to play the show, but when he didn’t make it, Riquhino took it out by holding Allocco and his son at gunpoint for 50 days. In 2012, Allocco sued Nas for $10 million dollars.

“Basically he was a promoter that I never worked with, and he wanted me to come to Africa for New Year’s, which, for me, I thought, would be the best way to spend New Year’s,” said Nas, to MTV in 2012. “The business wasn’t handled. There was nothing sent to me, and there were no flights. By the time he did send money—he did eventually send money to me—but it was too late to go. I didn’t even have a visa to get in the country. So that’s canceled, the show’s canceled.”

Despite all the incidents, it seems like Ja Rule and Fat Joe are still cool with Riquinho. After the Untold Stories In Hip Hop interview aired, Ja Rule appeared on PeopleTV and downplayed the kidnapping. He claimed Riquinho was “our guy and he’s mad at us now.” He said Riquinho called up Fat Joe and cursed him out over the interview. Rule also that they only “sort of” got kidnapped because “you can’t actually pay somebody and kidnap them at the same time.”