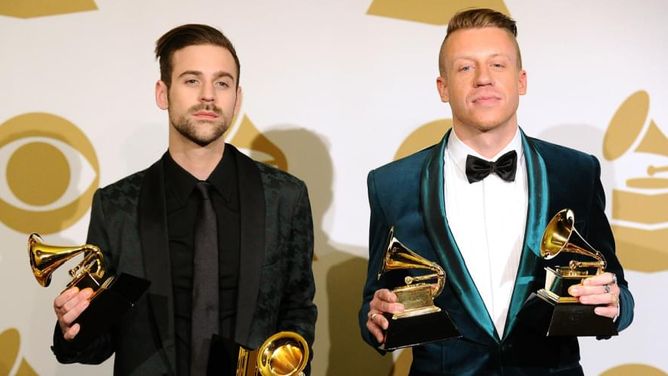 Macklemore & Ryan Lewis all but swept the Grammys' rap categories in 2014, coming away with Best Rap Album, Best Rap Song, and Best Rap Performance for their multi-Platinum 2013 album, The Heist. They beat several big names in the process, most notably Kendrick Lamar’s critically acclaimed major label debut, good kid, m.A.A.d. city In a new interview on Talib Kweli’s People’s Party podcast, Macklemore reflected on his “conflicted” mind state after the Grammys as well as his now-infamous text to Kendrick apologizing for winning.

“Obviously shouldn’t have been put on the internet,” he said about the text to Kendrick, noting that he found himself benefitting from a system he had tried to distance himself from for years.

“I’m struggling with like, ‘Damn, I’m benefiting from the system I’ve been calling out since I was 20 years old.‘ Here I am at the highest level of artistic merit, the Grammys, and here I am benefiting from the same sh-t I’ve been talking about,” he said. “So I was conflicted. People want to say it was guilt. It was, ‘He feels guilty about being white.’ That’s so surface level. Was there an air of that? Absolutely. Was that the reason? Absolutely not at the forefront. It’s systemically breaking this sh-t down about who wins and why they win.”

Macklemore has explored his own privilege and the systems that underpin it for many years, including on his 2005 track, “White Privilege” and its 2016 follow-up, “White Privilege II.” At the same time, the Seattle rapper said he felt that he deserved to be in the running amongst hip-hop acts.

Although Kendrick lost that year, he would go on to collect 12 Grammys (and counting), including Best Rap Album for both To Pimp A Butterfly and DAMN. The latter album would also earn the Compton rapper a Pulitzer Prize.

Macklemore has since released two albums, 2016’s This Unruly Mess I’ve Made with Ryan Lewis and 2017’s Gemini. Neither project earned a Grammy nomination.

Watch Macklemore’s full discussion above and catch up on all the lyrics to The Heistundefined on Genius now.