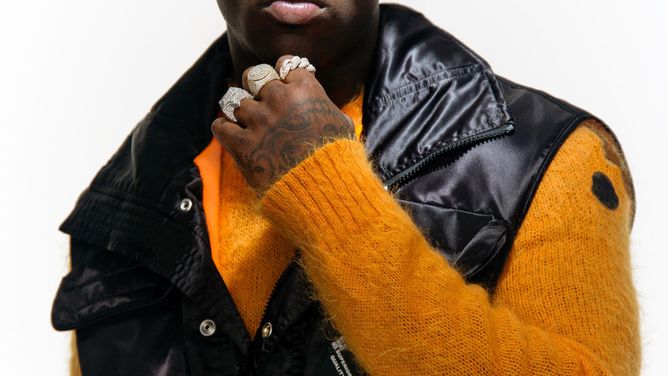 Here at Genius, we’re in a unique position as a music lyrics site to discover rising artists while staying on top of the latest trends. Millions of fans come to Genius every day after searching for the lyrics to songs they truly love, whether they’re looking for their favorite buzzing artists or the most viral songs of the moment. Based on our data, we’re going to pinpoint why fans have been searching for a selected artist. While our Top Songs charts already reflect what’s popular right now, this is a deeper dive into the data to find the hidden gems.

The death of Pop Smoke left a void in the Brooklyn drill scene. One artist who is helping fill that space is 21-year-old fellow Brooklyn rapper DUSTY LOCANE. It’s easy to see why, as Dusty and Pop share some unmistakable similarities. They both hail from Canarsie, Brooklyn, and even went to school together as kids. Dusty also raps over the same type of drill beats Pop helped popularize. Most importantly, while Pop Smoke had one of the most distinct voices in rap history, Dusty Locane sounds remarkably similar.

Part of Dusty’s steady rise these past few months can be attributed, at least in part, to comparisons to Pop. On January 8, DJ Akademiks shared a clip of Dusty’s “ROLLIN N CONTROLLIN FREESTYLE,” on Instagram writing, “Tell me y’all heard this… this dude sounds exactly like the Big Woo. We finna vibe out to this dude.”

“ROLLIN N CONTROLLIN FREESTYLE” was released in August 2020 and had already amassed over a million views on Youtube before Akademik’s post. But Ak’s co-sign likely did increase interest in the song on Genius. Before the post, the song was averaging about 270 daily pageviews. In the days right after January 8, it averaged 533. It topped 1,000 pageviews on January 14 and has been riding high ever since. The song now has over 7 million views on YouTube and over 7 million plays on Spotify.

However, it’s worth noting that searches for Dusty were already taking off on Genius before Akademik’s post. On January 6, Dusty hit 1,000 Genius searches. Since then, his name continually rose until he topped 10,000 searches on February 1.

“ROLLIN N CONTROLLIN FREESTYLE” isn’t the only song taking off for Dusty. His December 2020 release, “Rolando (Caught In The Rain),” already has over 7 million views on YouTube. That song is produced by The Basso Beatz, who sampled the voice of Fousheé, the same voice on Sleepy Hallow’s sleeper drill hit “Deep End.” Dusty only has a handful of songs, but with two legit viral hits, he could be well on the way to stardom. Not bad for a guy who told Genius, over email, that he only started rapping two years ago.

Prior to rapping, Dusty aspired to play basketball, even going to junior college for a year before getting expelled. After a brief stint in jail (he’s still fighting several charges), he decided to take rapping seriously eight months ago at the behest of his friends. He told Genius he grew up listening to everything from soca to R&B to gospel. He may be young, but he cites legends like 2Pac, The Notorious B.I.G., and JAY-Z as his biggest influences.

One thing he gets asked about a lot is his unique name.

“I get asked this all the time,” said Dusty, in an interview with Fucious Tv. “In Canarsie, where I’m from, moving ‘dusty’ is a term where it’s like you moving gritty, you on time, you do sh-t a certain way. That’s the name I adapted. And the ‘Locane’ is some Crip shit, add some finesse to it. Gritty with a little finesse.”

The questions that persist the most are the ones about Pop Smoke. In his Fucious TV interview, Dusty admitted he didn’t say much when Pop was murdered because he didn’t want to look like he was exploiting his death, though he did say, “Long live Pop Smoke, the greatest to do it."

Dusty certainly isn’t the first hip-hop sonic doppelganger. Rappers like Shyne, Action Bronson, and Young Thug were often compared to artists like The Notorious B.I.G., Ghostface Killah, and Lil Wayne (respectively) before establishing their own unique identities. However, other artists like Loon—who hailed from Harlem and signed to Bad Boy—never quite shook comparisons to rappers like Ma$e.

It’s impossible to say if Dusty will eventually establish his own unique identity, but fans should be aware that dismissing an artist for sounding like a clone can backfire. Last year, Taz Taylor shared screenshots of Juice WRLD songs he sent to labels in 2017, only for A&Rs to tell him Juice sounded like “a Lil Uzi clone.” Taylor urged labels to stop dismissing artists as “clones” and search for the talent underneath.

Perhaps fans are doing the same for Dusty, though it doesn’t seem to worry him. When we asked him how he plans to overcome Pop’s long shadow, he responded writing, “Time will do all the talking for me.”