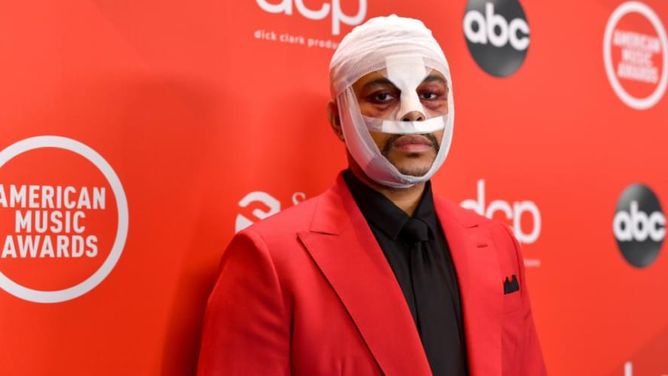 The Weeknd’s After Hours rollout stretched across the better part of a year, as fans watched his red-suited character evolve through a series of videos and live performances. The bloodied-nose Las Vegas reveler had his head cut off and reattached and get covered in facial bandages before recently emerging with a disturbing plastic surgery look.

In a new interview with Varietyundefined, he explained the meaning behind his transformation.

“The significance of the entire head bandages is reflecting on the absurd culture of Hollywood celebrity and people manipulating themselves for superficial reasons to please and be validated,” he said. “It’s all a progression and we watch The Character’s storyline hit heightened levels of danger and absurdity as his tale goes on.”

He also noted that the sometimes off-putting looks were valuable to create an over-arching storyline for the project.

“I suppose you could take that being attractive isn’t important to me but a compelling narrative is,” he said, explaining that he liked to let the “lines blur” between himself and his character.

After Hours is one of 2020’s biggest albums, producing five Top 20 singles including “Blinding Lights,” the longest-running Top 10 hit in Billboard history. He’s set to take the stage at the Super Bowl LV Halftime Show this Sunday, Feb. 7.

Catch up on all the lyrics to The Weeknd’s After Hoursundefinedundefined lyrics on Genius now.