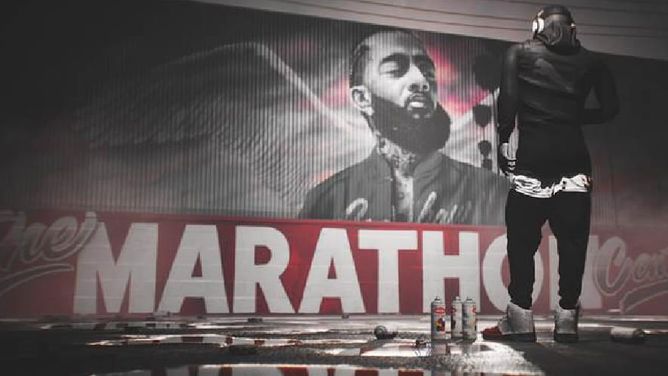 It’s been a decade since the release of Nipsey Hussle’s heralded mixtape, The Marathon, and the late rapper’s label and estate are commemorating the occasion with an interactive album experience. The virtual production will allow fans to visit some of the Los Angeles landmarks and neighborhoods that inspired the mixtape, and features “never-before-seen content” from that era of his career.

“We wanted to create a dream-like world set in the era of 2009-2010 Los Angeles, a time when Nipsey was crafting and preparing to release his Marathon Mixtape,” said Kam Burk, creative director at OkiDoki. “It’s almost like a virtual time capsule of this pivotal point in Nipsey’s career. We recreated his vehicle, a Mercedes SL550, and a lot of the landmarks Nipsey frequented and some historic Los Angeles sites using Jorge Peniche’s photography, google maps, 3D modeling software and made it beautiful and interactive in Unreal Engine."

Burk noted that they had to work around certain challenges.

“His family asked us to not make an avatar of Nipsey, so we had to cleverly use the vehicle, audio interviews and projected imagery and videos in the virtual environment to allow the viewer to feel Nipsey’s presence,” he said. “Nipsey loved using his car as a music venue for testing out unreleased tracks so we created the illusion that the car is always the source of audio in each of the scenes.”

The Marathon dropped in December 2010, and was Nipsey’s first project to chart on Billboard 200 despite being released for free. It features Kokane and MGMT, and dropped as Nipsey was trying to separate himself from a deal with Epic Records. He would go on to turn “The Marathon” into his personal brand, launching a clothing store under the same name in Los Angeles in 2017.

Catch the full experience on Nipsey Hussle’s YouTube page, and read all the lyrics to The Marathonundefined on Genius now.