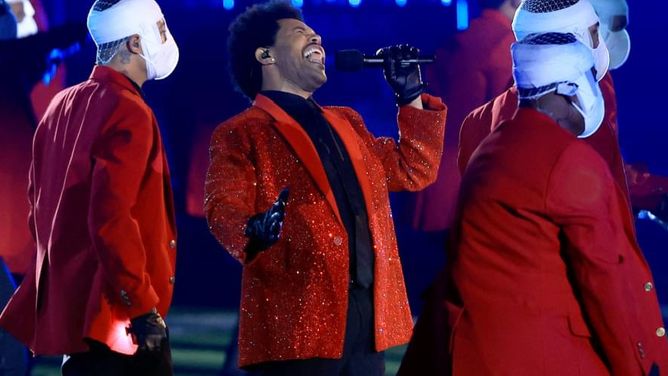 Before The Weeknd was one of the planet’s biggest pop stars, he was a reclusive R&B blogosphere phenomenon, releasing music without revealing his face or identity. When he took the stage at the Super Bowl LV Halftime Show, he managed to work in a nod to his musical roots with a short performance of “House of Balloons / Glass Table Girls.”

The song played during a set transition, as The Weeknd made his way from the stage down to the field flanked by dozens of masked dancers. He added some vocal riffs as the song’s chorus played:

“House of Balloons / Glass Table Girls” appeared on his first mixtape, House of Balloons, in 2011 at a time when The Weeknd’s identity was shrouded in mystery. His shadowy celebrity played a pivotal role in his initial rise to fame and would prove to be a blueprint for other musical acts.

Longtime fans celebrated the song’s performance, reflecting on his long journey from an early 2010s blog favorite to a worldwide pop star:

The performance took some by surprise, as the song wasn’t including on The Weeknd’s recently released greatest hits album, The Highlightsundefined. “House of Balloons” earned nearly 10,000 pageviews on Genius in the past 24 hours as fans flocked to revisit the song’s lyrics.

Catch up on all the lyrics to The Weeknd’s “House of Balloons / Glass Table Girls” on Genius now.