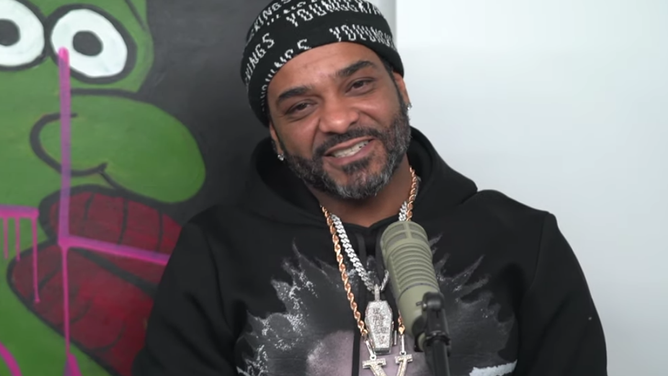 Jim Jones recently stopped by The Joe Budden Podcast where he recalled wanting to “f-ck up” Lil Wayne back in 2006. During the podcast, Mal reminisced on the time Jones previewed the song “Weather Man” for him. “Weather Man” featured Lil Wayne and Stack Bundles and was a cut off Jones' 2006 album, Hustler’s P.O.M.E. (Product of My Environment). Around the same time, Fat Joe released his Lil Wayne assisted single “Make It Rain” which featured a very similar hook to “Weather Man.”

“I wanted to f-ck Weezy up over that record, man,” said Jim Jones about ‘Weather Man,’ after recalling how the late Stack Bundles asked him to get Wayne on the track. “But Weezy’s my brother, you know I love him to death. But Weezy did some wacky sh-t when it came to that record. Remember he had a record with Fat Joe called ‘Make It Rain On ‘Em’? That was our hook. Now go listen to that record, and then pull up 'Weather Man.’”

On Jim Jones “Weather Man,” Weezy performs the hook at one point and raps:

On Fat Joe’s “Make It Rain,” Wayne has a similar refrain when he raps:

Jones made it clear he was ready for things to get ugly when he saw Wayne, but his Dipset cohort Juelz Santana—who was once rumored to be making a joint album with Wayne—made sure cooler heads prevailed.

“I caught Weezy in a club one day,” said Jones. “I was like, ‘Boy.’ Juelz was like, ‘Jim.’ Juelz stopped that situation. Weezy took that hook and put it on Fat Joe record and had no explanation for it but, ‘Yo, I be high.’ I said alright, Ima show you high. I was ready to take it to the next level.”

Joe Budden added that Jones had a right to be upset. Thanks in part to Wayne’s hook, “Make It Rain” became a huge hit for Fat Joe, peaking at No. 13 on the Billboard Hot 100 and eventually going gold. Meanwhile, “Weather Man” was an album cut for Jones, but his album still found major success thanks to his smash hit “We Fly High.”

Despite the discord over “Weather Man,” Lil Wayne has enjoyed a fruitful relationship with Dipset, collaborating with Jones, Santana, and Cam'ron on numerous songs.

Read all the lyrics to Jim Jones “Weather Man” on Genius now.