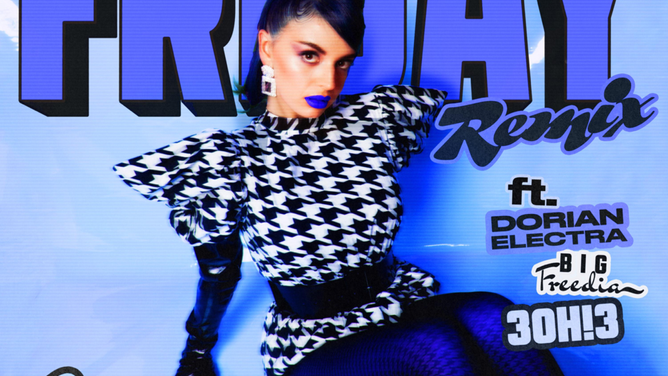 Ten years ago, Rebecca Black’s tween-pop single, “Friday,” became an unexpected viral phenomenon, amassing millions of YouTube views thanks to its cringeworthy lyrics and comedically low-budget video. A decade later, the singer decided to commemorate the occasion with an unexpected hyperpop remix of the track. Helmed by Dylan Brady of 100 gecs, the updated version of the track features Dorian Electra, Big Freedia, and 3OH!3.

Black’s vocals are pitched up on the new song, while 3OH!3’s Sean Foreman raps a new verse:

It’s ten years later, now it’s 3OH!3 on FridayI’m sick of living through this Monday, Tuesday, WednesdaysBut then Thursday comes along and we are saying“Friday, here comes f-cking Friday”

Big Freedie comes in later on to spit:

Despite being a late-aughts punchline, “Friday” was recently certified Gold. Black previously spoke about how the backlash to her song’s release made her “afraid of the world,” but ultimately helped her decide she wanted to keep pursuing music. She’s attempted a musical comeback in recent years, releasing EPs like RE / BL and Self Sabotage / Closer.

Read all the lyrics to Rebecca Black’s “Friday (Remix)” on Genius now.