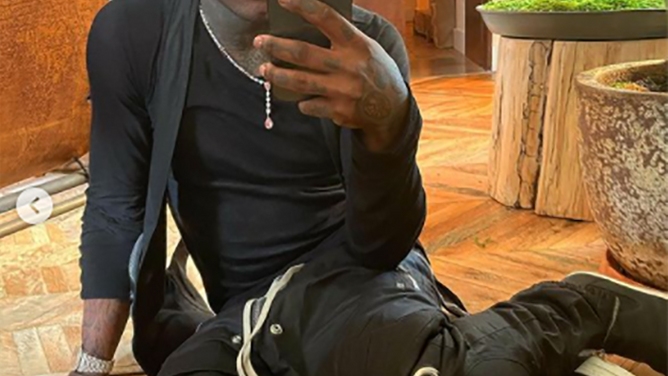 Lil Uzi Vert did more than just dismiss his album Eternal Atakeundefined during his conversation with Fat Joe on Instagram Live, he also named his five most influential rappers. Uzi’s list was not only diverse but included some unexpected names.

According to Uzi, his No. 1 influence is Houston rapper Mike Jones.

“The first rapper that I ever learned lyric for lyric was Mike Jones,” said Uzi. “That’s the first rapper I learned everything lyric for lyric, and I wanted to be like him…I had a Boost Mobile, and my mom would give me $15, I’d get phone cards and sh-t, and I would spend all my money calling Mike Jones' number ‘cause I wanted to talk to him…I remember the number by heart. Right now, to this day: 281-330-8004…I felt that star power from him. He had that star power.”

The second rapper he cited was Lil Wayne, as he riffed on Wayne’s fashion.

“And then after Mike Jones, of course, I wanted to be Lil Wayne,” said Uzi. “When I was younger, girls would say I looked like Lil Wayne so that I would run with that. And I would wear fedoras, and I would wear the tight Polo tees with the skinnies and wear the Vans and sh-t…And back then, I ordered a fake piercing off Amazon, and it was a magnet, and I had it right here [*gesturing to the side of his lower lip], and I would wear it every day like I was Lil Wayne.”

Uzi noted the influence of Remy Ma as well, saying that his aunt was a big fan of hers. He also mentioned Kurupt, noting that he was a Philadelphia-born rapper like himself. He went on to say Kurupt had an “East Coast mentality but that West Coast swag.”

For his final pick, Uzi named the ever influential Young Thug.

“I gotta say Young Thug,” said Uzi. “You wanna know why? And this was later in my life. So, I used to listen to I Came From Nothing, I Came From Nothing 2. Just all that sh-t. And I used to watch on YouTube when Young Thug used to perform at the little skating rink shi-s…The reason that he was such an influence to me [was] because he was almost like a mythical creature back then…I actually knew before the public. Not even from the public. I’m not from Atlanta, so everybody out there knew about that man before me…But, just where I was from, I felt like I was the first person in the f=ckin‘ world that was listening to him. I felt like that.”

Uzi added how Thug embraced him as his career took off, adding another layer of influence.

“What made it even more crazy, when I moved to Atlanta and started my career, he just embraced me,” said Uzi. “The first day I met him, he embraced me. And he already knew who I was, so…It was just a big A+…He definitely is a big influence in my career right now, the beginning.”

Watch the interview between Lil Uzi Vert and Fat Joe above.