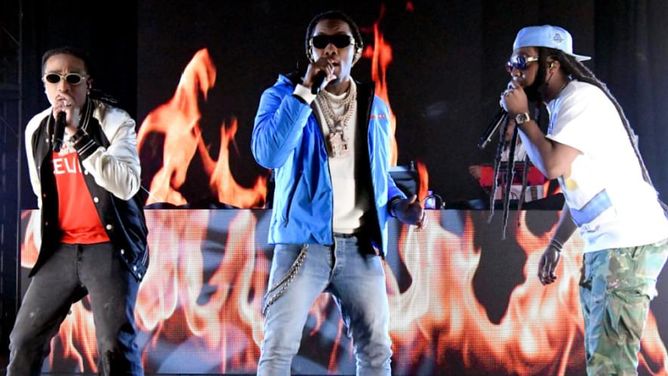 Atlanta rap trio Migos released Culture and Culture II in rapid succession in 2017 and 2018, cementing their spot as one of raps' biggest groups. It’s now been three years since their last album together, but fans may not have to wait much longer for the completion of the trilogy.

“It’s coming real soon,” Quavo said to paparazzi after a Valentine’s Day date with Saweetie. “Less than a month and a half.”

That timeline would put the album’s release sometime between now and the end of March, with six potential Friday release dates on the calendar.

The group first teased the release of Culture IIIundefinedundefined in late 2018, saying they planned to drop it after rolling out their respective solo albums. Later on, they indicated that it would drop in early 2020, before the pandemic upended the music industry.

The group most recently shared a teaser trailer for the album on the three-year anniversary of Culture II, giving fans new hope for its release. Quavo’s latest statement provides an even more concrete timeline.

Culture helped re-establish the group as a dominant force in hip-hop, following the rocky rollout of their 2015 debut, Young Rich Nationundefined. Culture II wasn’t as well-received by critics, but produced huge hits like “Stir Fry,” “Motorsport,” and “Walk It Talk It.”

They’ve primarily released solo work since then, but songs like “Need It” and “Racks 2 Skinny” proved they’re never far from each other’s orbits. Migos recently reunited onstage at the Super Bowl LV’s SHAQ Bowl event, perhaps the first of many upcoming performances together.

Catch up on all the lyrics to Migos' Cultureundefined and Culture II on Genius now.