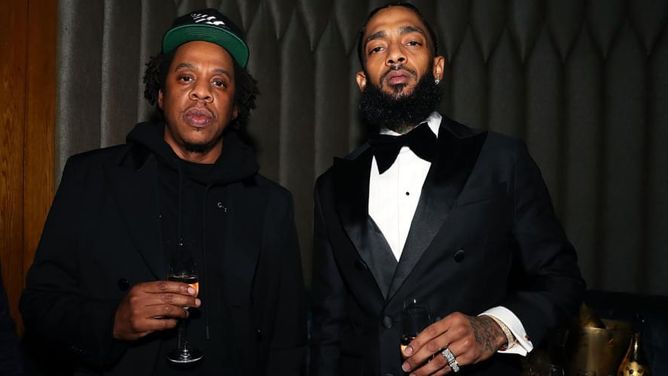 Fans finally saw JAY-Z and Nipsey Hussle unite on wax last week with the release of “What It Feels Like,” a cut off the Judas and the Black Messiah soundtrack. While it was their first official collaboration, GQundefined reports that the song has been in the works for eight years.

Production duo Mike & Keys revealed that Nipsey first started recording “What It Feels Like” in 2013, but they “thought Nipsey really didn’t like that song at first.” Keys pointed to a lyric on Nipsey’s verse as evidence of this early recording date:

Drop another mixtape, my sh-t boomin' out this b-tch

“He was talking about Crenshaw,” said Keys, referencing the rapper’s 2013 mixtape. Nipsey famously sold copies of the tape for $100 each, a move that grabbed headlines and first helped him attract Jay’s attention when the Brooklyn rapper purchased 100 copies. Nip would eventually sign a management deal with Roc Nation.

“This beat was born in 2013,” said producer Larrance Dopson. “2015 was when we added the horns. 2017, we put the strings on it and made [Nipsey’s line in his verse] ‘what it feels like’ into a hook… Jay heard it five years ago when Nipsey was still here, and loved it. Then he asked for it again about a year ago.”

Mike noted that they “always thought” the song would be a Nipsey and Jay collaboration, but it didn’t come together until the last minute. “My relationship with Ryan [Coogler], who I consider my little bro, [is what] brought me to the movie,” Jay-Z told GQ. “And once I saw it, I was blown away by what Shaka King brought to the table. I think I finished the song in the next day or two.”

Jay’s verse contains up-to-the-minute political references to the January 6th riots at the US capitol building. Although Jay doesn’t say the exact date he recorded his verse, these lyrics imply it’s less than one month old:

You let them crackers storm your Capitol, put they feet up on your deskAnd yet you talkin' tough to me, I lost all my little respect

Although they never got to work together on music during Nipsey’s lifetime, the two artists' new song feels like a natural marriage. According to his collaborators, it’s exactly what he would have wanted.

“I feel like [Nipsey] is really proud right now,” Dopson said. “If Nip was here, he’d say, ‘What are y'all doing? Let’s keep working and get to the next stage. Let’s not get comfortable.’”

Jay and Nipsey appear alongside a star-studded group of artists on the Judas and the Black Messiah soundtrack, including Nas, H.E.R., Lil Durk, Pooh Shiesty, Black Thought, Polo G, Smino, Saba, and more.

Read GQundefinedundefined’s full report here and catch up on all the lyrics to Nipsey Hussle and JAY-Z’s “What It Feels Like” on Genius now.