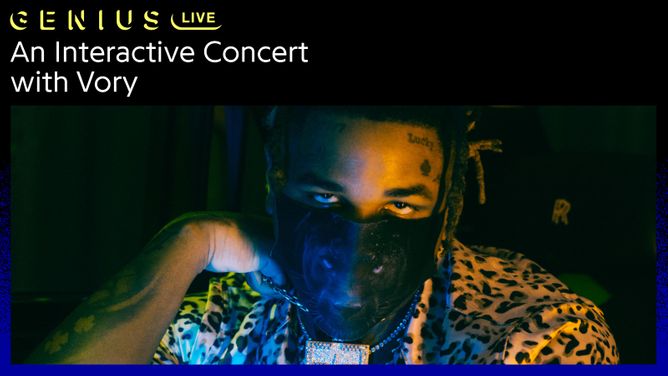 With concerts still mostly on hold around the world, Genius continues to help fill that void with Genius Live, an experiential platform with a live and fully interactive concert. The latest installment is set to be headlined by rapper and singer Vory on Thursday, Feb. 25 at 9 PM ET.

Not only will fans be able to watch Vory’s performance and connect with each other on chat, they can also make special purchases in real-time that will shape the concert experience. Fans will be able to get a shoutout, participate in a meet and greet, and even buy exclusive merch.

Hosted by Genius’s Jacques Morel, Genius Live will be available to stream for free on the Genius Live platform, with concert simulcasts set to take place on YouTube and Instagram.

Fans can participate by signing up for free at live.genius.com. Fans have the following opportunities to participate in the concert (all costs in USD):

Vory is a Houston-born artist who got his start after moving to Louisville, Ky. as a teenager and linking up with R&B phenom Bryson Tiller. After appearing on the singer’s debut album, TRAPSOUL, and earning a writing credit on the multi-Platinum hit, “Don’t,” Vory would make a name for himself with projects like 2018’s Lucky Me and 2020’s self-titled.

He won a Best Urban Contemporary Album Grammy for his writing work on THE CARTERS‘ EVERYTHING IS LOVE, and also snagged writing credits for artists like Drake (“Mob Ties”), Post Malone (“On the Road”), and DJ Khaled (“Celebrate”).

Catch up on all the lyrics to Vory’s biggest hits on Genius and tune into the show on Thursday, Feb. 25 at 9 PM ET.