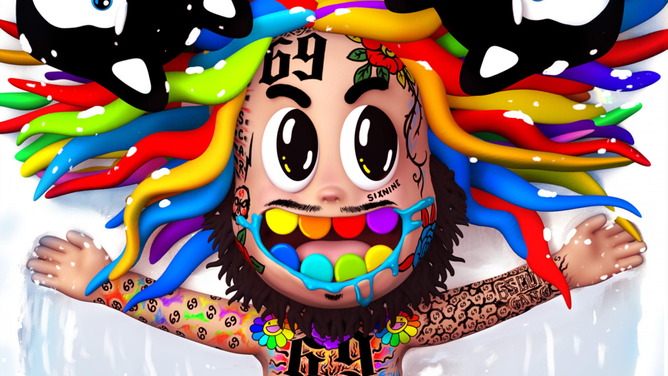 After a few months of silence following the disappointing release of his post-prison album, TattleTalesundefinedundefined, 6ix9ine is re-entering the rap scene and once again lobbing bombs at his enemies. The rapper’s new music video for “ZAZA” includes a clip of his recent altercation with Meek Mill in a parking garage and features lyrics that appear to take aim at Lil Durk.

6ix9ine’s beef with Meek dates back to 2018 when Meek spoke on 6ix9ine’s arrest and eventual cooperation with federal authorities. The Brooklyn MC has tried to spark further issues ever since, most recently by running up on Meek outside a club. Meek responded after the fact, saying the “feds sent him to take me out.” Despite his role in getting his former friends locked up, however, 6ix9ine still ironically shouts out his incarcerated associates later in the song:

And we still screamin' out “Gang, gang, gang,” lookFree the guys in the chain-gang-gang

The first verse of “ZAZA” aims at another one of 6ix9ine’s rivals: Lil Durk. The Chicago rapper appeared to reference 6ix9ine as a “rat” on Drake’s “Laugh Now Cry Later” last year, turning him into a target for 6ix9ine’s antagonizing antics. On the track, he appears to address the November 2020 shooting death of Durk signee King Von outside an Atlanta nightclub:

Are you dumb? You ain’t spin a block, you a damn lieSuck a d-ck, you ain’t kill sh-t, you let your mans die

He underscores the same point a few lines later:

Are you dumb? When you see me, you better runYou got your gun?They caught that n-gga lackin' like a b-tchThey killed your cousin and your man and you still ain’t do sh-t

6ix9ine continues to demonstrate the need for constant controversy to push his career forward. He built a name for himself by feuding with artists like Chief Keef, Trippie Redd, YG, and more, using the publicity to help drive interest in his records. He’s found a less-receptive audience post-prison, with Lil Tjay and Lil Durk even claiming that someone from his camp tried to pay them to beef with him. Clearly, he’s not done stirring the pot.

Read all the lyrics to 6ix9ine’s “ZAZA” on Genius now.