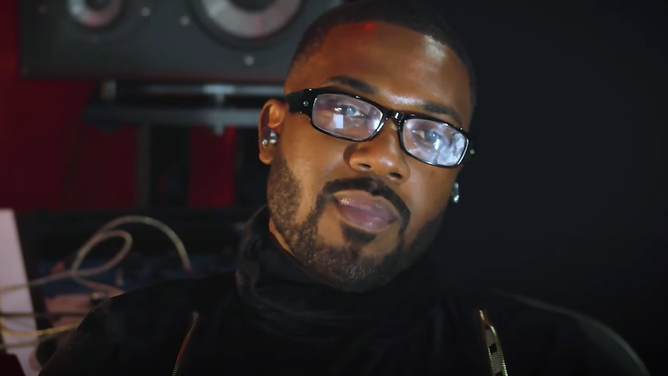 Ray J and Kanye West’s respective relationships with Kim Kardashian have played out in both artists' music over the years, most notably with Ray J’s 2013 track “I Hit It First” and Kanye’s 2016 song “Highlights.” In a new episode of Genius' Between the Lines, Ray J revealed his reaction to being name-checked on Kanye’s “Highlights” verse.

On the track, Kanye raps:

I bet me and Ray J would be friendsIf we ain’t love the same b-tchYeah, he might have hit it firstOnly problem is I’m rich

“That’s what it say in the song? No it don’t. That was cool. That’s like he having a conversation,” he said, revealing that he hadn’t heard the latter two lines. “I didn’t know it said all of that. I thought it just ended after the b.i.t.c.h. line.”

Ray J went on to compliment Kanye’s artistry and express a desire to put the past behind him.

“Listen, Watch the Throne is one of the greatest albums of all time. Hands down. And the concert, that was some of the craziest sh-t and some of the most simple creative masterpieces I’ve ever experienced,” he said. “Maybe we might need to be friends now. Everybody needs to just put all that sh-t behind. It’s 2021. It’s all love over here. Let’s bring the love together. It’s all good man, God bless.”

Kanye’s “Highlights” verse references Ray J’s “I Hit It First,” which in turn calls back to Ray J’s infamous sex tape with a then-unknown Kim Kardashian. She became a frequent reference in Kanye’s music over the years, beginning with her appearance in the “Bound 2” video. Unfortunately, Kim and Kanye recently filed for divorce after seven years of marriage.

Read all the lyrics to Kanye West’s “Highlights” on Genius now.