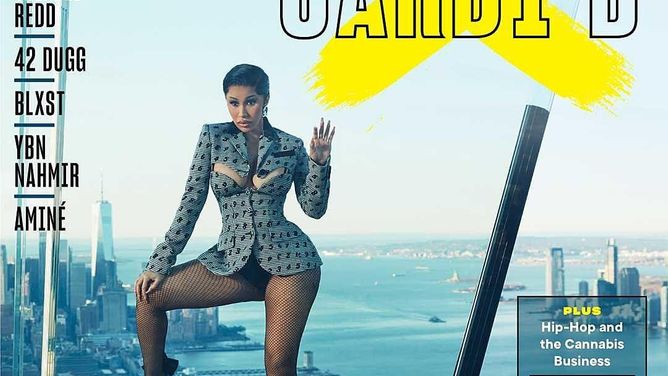 Cardi B Speaks On Resisting Being Pit Against Other Female Rappers

Cardi B has seen her share of feuds as she’s risen to the top of the rap game, but she’s tired of being pit against other women. The Bronx MC covers XXL magazine this month, where she speaks about showing support for other women rappers and how she doesn’t view female hip-hop as a zero-sum game.

“I just don’t like to be on pace with somebody else. I like running on my own time. I like doing things on my own time and my way,” she said. “So, I really hate when people pit me against each other, because it just makes me feel like I gotta move like them. And I don’t like moving like nobody else. Even last year, everybody was putting music out, all the females. Nicki Minaj. Doja Cat. Megan Thee Stallion. And people was just saying, ‘Oh, Cardi is over. Cardi’s over.’ Everything that I accomplished, people was trying to erase it just because new females were out.”

Cardi said the unecessary pressure complicates her creative process. “That sh-t made me feel like, Damn, I gotta rush, rush, rush, rush, so I could be in the lineup with these girls,” she said. “And you know what? I said, ‘No.’ And I kept recording. I kept writing down ideas of how my next single rollout was gonna come out ’cause I ain’t put out music in six, seven months. And when I do things in my time, in my pace because I’m not watching other bitches, I do great.”

Cardi noted that the success of others doesn’t diminish her own, and vice versa.

“I’m not gonna put out a song because other bitches is doing good or they’re doing great. That’s them,” she said. “What they eat don’t make me sh-t. And then, it’s just like, it was a really weird moment for me because I hate working because of other people pace. Because other people is doing something. Alright, they doing good, then that’s good for them. But just ’cause they doing good doesn’t mean that I’m gonna be out here rushing my life. Or like, rushing to be in line with them. When it’s my moment, it’s my moment.”

The Bronx MC has worked with female hip-hop acts like Megan Thee Stallion and City Girls in the past, and offered cosigns to the likes of Tierra Whack, Rhapsody, CHIKA, and more. She said that she doesn’t feel an obligation to promote other women in hip-hop, but also doesn’t see them as a detriment to her own career, either.

Cardi is expected to drop her sophomore album sometime this year, although the project doesn’t have a release date just yet. She told XXL that after their late-March photoshoot, she planned to head home and lock herself in the studio finishing the project.

Read Cardi’s full XXL interview here and catch up on all the lyrics to her recent single, “Up,” on Genius now.