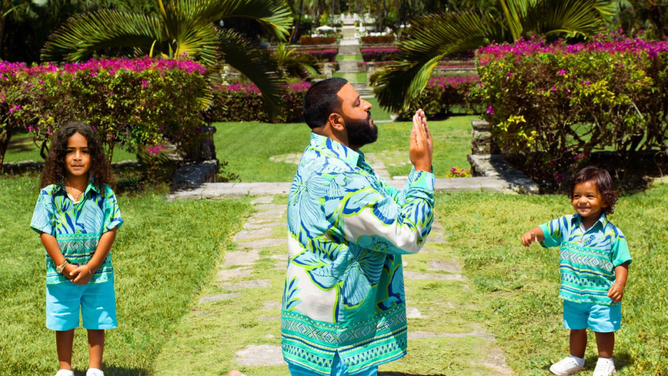 Many of the songs on DJ Khaled’s new album, Khaled Khaled might sound familiar to longtime rap fans. As he’s done in the past, DJ Khaled used many samples that have been famously used in other classic rap songs. This time around, Khaled took inspiration from songs by artists like JAY-Z, The Notorious B.I.G., Ghostface Killah, Beanie Sigel, Shyne, and Shawty Lo.

Khaled’s album kicks off with the song “THANKFUL,” which features Lil Wayne and Jeremih. The track samples a flute line from Bobby “Blue” Bland’s 1974 song “Ain’t No Love in the Heart of the City,” but rap fans are likely to recognize that song because Kanye West memorably sampled it for JAY-Z’s 2001 cut “Heart Of The City.”

That’s not the only song on Khaled’s album that takes inspiration from JAY-Z’s 2001 album The Blueprint. The JAY-Z and Nas-assisted song “SORRY NOT SORRY” samples Jay’s “Song Cry,” which was originally built around a sample of Bobby Glenn’s 1976 song “Sounds Like a Love Song.”

Elsewhere on the album, Khaled teams up H.E.R. and Migos for the song “WE GOING CRAZY.” Once again, the track is built around a sample of a 1970s song, this time Mandrill’s 1972 track “Children of the Sun.” However, most rap fans will likely recognize the ‘70s track as the same song the late Shawty Lo sampled for his signature hit “Dey Know.”

A few tracks later, A Boogie wit da Hoodie, Big Sean, Rick Ross, and Diddy all join forces for “THIS IS MY YEAR.” The song samples The Notorious B.I.G.’s “Long Kiss Goodnight,” which itself was built on a sample of Al Green’s “The Letter.”

The inclusion of Diddy is significant here, not only because Diddy’s signature rant at the end alludes to the Biggie song, but because Diddy also made a career out of sampling famous ‘70s and '80s tracks—occasionally to the chagrin of hip-hop purists—in the '90s. Khaled has likely taken inspiration from Diddy’s tried and true formula of repurposing hits for the hip-hop audience.

Khaled’s sampling formula doesn’t just apply to the rap heavy songs, but to R&B-styled ones as well. On the Justin Timberlake helmed “JUST BE,” Khaled samples Ghostface Killah’s Mary J. Blige assisted song, “All That I Got Is You,” which was built around a sample of The Jackson 5’s “Maybe Tomorrow.”

On the very next track, Bryson Tiller, H.E.R. and Meek Mill collaborate for “I CAN HAVE IT ALL,” which samples Raphael Ravenscroft’s 1979 song “Whole Lotta Something Goin' On.” The same song was used by Beanie Sigel for his 2005 single “Feel It In The Air.”

The album closer, “WHERE YOU COME FROM,” is a reggae banger that teams up Buju Banton, Capleton, and Bounty Killer over a sample of Barrington Levy’s “Here I Come (Broader Than Broadway).” Back in 2000, Bad Boy rapper Shyne sampled the same song for his debut single, “Bad Boyz.”

Sampling classic songs is by no means a new tactic for DJ Khaled. In the past, he sampled hits like OutKast’s “Ms. Jackson” for the SZA-featuring “Just Us” and Carlos Santana’s “Maria Maria” for the Rihanna and Bryson Tiller collaboration “Wild Thoughts.” However, on his newest album, he doubled down on his blueprint.

Read all the lyrics to DJ Khaled’s Khaled Khaled on Genius now.