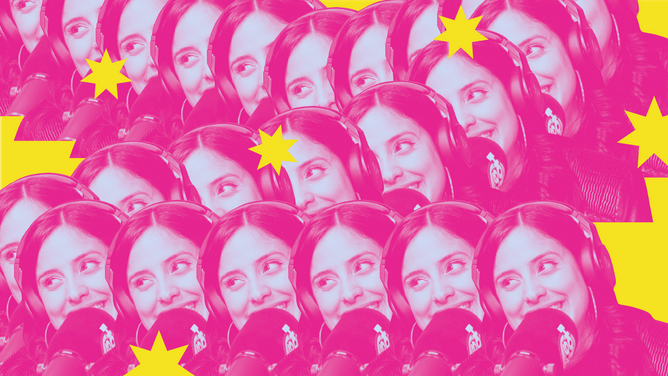 Before radio personality Laura Stylez became a mother, nothing was more important to her than her career. “When I was just starting, I lived my entire life working,” Stylez tells Genius. “Everything was radio, because I needed to learn all the aspects of it.”

That dedication is largely the reason for Stylez’s rise to success. In the early days of her New York radio career, the Los Angeles native was often the only one willing to take unwanted shifts, run the audio boards behind the scenes, or host club nights for a measly couple hundred bucks. “I used to be in the studio every single day, Monday through Friday,” she says. “If you needed me on Saturdays, I would be there. In my line of work, there are a lot of hours that you have to put in.”

The hours certainly paid off—in 2013, Stylez earned a full-time spot as co-host of HOT97’s flagship program Ebro in the Morning, through which she’s built a dedicated fan base of over 225K Instagram followers and interviewed everyone from Cardi B to Tyler, the Creator. That gig has brought her other opportunities, too. Over the years, she’s hosted red carpet events and lent her voice to commercials and video games, including Grand Theft Auto.

In 2020, however, when she embarked on a new kind of journey—motherhood—Stylez had to reassess everything, and the discourse surrounding mothers in the music industry wasn’t exactly encouraging. ”I grew up at a time where everyone would tell you, ‘Don’t get pregnant. You’ll never have a career,’” Stylez says.

She wound up seeking inspiration from women who defied those expectations. Like Cardi B, who famously announced her pregnancy on SNL just as her career was taking off. “So many people were telling her, ‘Your career will be over, it’s done. It’s not going to happen. You’re just starting,’” Stylez says. “And then we saw her perform her ass off. And she’s still at the top of her career.”

But motherhood is still harder than Stylez imagined. For starters, she couldn’t have predicted the world would shut down over a pandemic during her pregnancy. As a high-risk individual, Stylez felt scared to leave her house to get air, and she had to beg her doctors to allow her partner in the delivery room. After she gave birth and it was time to return to work, things got worse before they got better.

“I had this insane guilt about being away from my child and leaving her with my partner,” she says. “And I dealt with postpartum depression. One of the hardest parts about motherhood and going back to work was giving myself grace and the time that I needed to not only heal physically, but emotionally. I had to really, really, really take my time in figuring out what tools I needed to make my life a little easier.”

As she adjusted to life as a mom, Stylez made a few career changes. First, she switched to a hybrid schedule, working a few days in the studio and a few days from home. She also got a lot more selective about what after-hours events she’ll agree to attend. “In our line of work, there’s always a listening party and a concert,” Stylez says. “But I don’t really go out to evening events unless I really want to do it. It has to be something important because I have to get a babysitter.”

Stylez is first to admit those modifications might not have been feasible if she were at an earlier phase in her career—and they definitely wouldn’t have been possible if she didn’t have the support of a good partner, her “tribe” of mothers, and her team at HOT97, which includes co-hosts Ebro Darden and Peter Rosenberg. She recalls a few times when she would be dozing off or having to throw up during a broadcast, and her co-hosts would cover for her. “They helped me tremendously,” she says. “I really wish all women could have the type of support that I have at work, because I’ve heard too many horror stories.”

That level of support extends to Stylez’s fans as well. As soon as she announced her pregnancy on air, she got a swarm of positive responses from listeners. “People were calling in like, ‘Welcome to motherhood. This makes me so happy. I feel like I know you,’" she says. “Regular, amazing, everyday people. I was in tears.”

Now, Stylez sees motherhood as a career strength, not a weakness. In fact, it’s made her even more driven to succeed, now that she has “someone else to provide for.” Motherhood has also introduced Stylez to a whole different demographic of social media followers who appreciate her transparency, and it’s inspired new on-air segments. She recently opened up the phone lines to ask women how much maternity leave they took after giving birth. Their responses were eye-opening.

“We had women calling and saying, ‘I had to go back to work the next day, because if I didn’t get paid, I couldn’t pay the rent,’” Stylez says. “It’s almost like a luxury, because I’m able to work for a company who allowed me the time I needed. Not everyone is guaranteed that, and it really broke my heart to learn how many people didn’t have that.”

For expectant mothers juggling careers in music, Stylez hopes her journey can be an example. It’s possible to become a parent without sacrificing your dreams; all it takes is a little patience, a lot of support, and some balance—though that last one can be tricky. “When I’m working at home, there’s times where my partner will come out with my little girl and she’s screaming,” Stylez says with a laugh. “I’m in the middle of a show, the dog’s barking and it’s chaotic.”

At the end of the day, her daughter makes even the most hectic of times worth it, though. “I can’t believe that she came out of me,” Stylez says, beaming with gratitude. “I created a human being.”