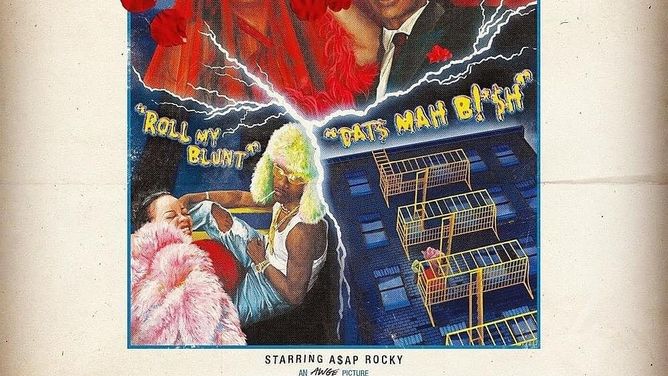 A$AP Rocky’s new song “D.M.B.” was bound to get people talking. According to the single artwork, “D.M.B.” is a “ghetto love tale,” one involving Rocky and his super-famous girlfriend and soon-to-be baby momma, Rihanna. In the video, which Rocky directed, the A-listers get married, and the lyrics contain a possible Chris Brown diss. “D.M.B.” was almost certain to reach No. 1 on the Genius Top Songs chart, where it now resides.

As the cover art also reveals, “D.M.B.” stands for “Dat’s Mah B!*$h,” which may come as a disappointment to those hoping for a Rocky tribute to the Dave Matthews Band. (Perhaps on the next album cycle.) According to a tweet from Rocky, the song was recorded at the London home of U.K. rapper Skepta, who shares production credit with Hector Delgado, Kevin Krash, Shlohmo, and Rocky himself. The laid-back beat gives Rocky plenty of space to honor his lady as he sees fit. He begins in the chorus.

Roll my blunt, fill my cup, be my bitch
Hold my gun, load it up, count my slugs (That’s my bitch)
Yeah, they don’t know nothin’

The language is even harder in the post-chorus, where Rocky does the lovey-dovey thing on his own terms, regardless of what anyone else thinks.

Rihanna has a reputation for being a hard-partying bad girl—she even titled an album Good Girl Gone Bad—and in the first verse, Rocky celebrates this side of her personality.

Probably think I wanna hit and run,
bad girls wanna have fun
I don’t want no goody two-shoes, no, none
I ain’t no priest, I ain’t gon’ preach

A couple lines later, Rocky quite possibly takes a shot at Chris Brown, who was famously arrested for assaulting Rihanna in February 2009.

I share my clothes with my bitch like she my sis
I don’t beat my bitch, I need my bitch
She clean my crib, she feed my friends
She keep my secret, she keep my fridge packed, my freezer lit

Rocky starts the second verse by mentioning another thing he likes about Rihanna: her self-sufficiency.

Things get more traditionally romantic in the bridge, where Rocky professes his love over and over again. It’s at this point in the “D.M.B.” video that he proposes via words spelled out in his gold grill—an offer Rihanna accepts in the same fashion. Just as quickly, the pair are married, with Rihanna opting to forgo the traditional white in favor of red. Rocky’s lyrics fit nicely.

In another tweet accompanying the “D.M.B.” drop, Rocky thanked Rihanna for providing the song’s “motivation.” The release was actually a long time coming, as Rocky first teased the music in a June 2021 commercial for the Swedish fintech firm Klarna. The following month, Rocky and Rihanna were spotted in the Bronx filming the music video. This was roughly six months before Rihanna announced her pregnancy, so fans need not worry about all the smoking and drinking in the clip.

You can read all the lyrics to “D.M.B.” on Genius now.