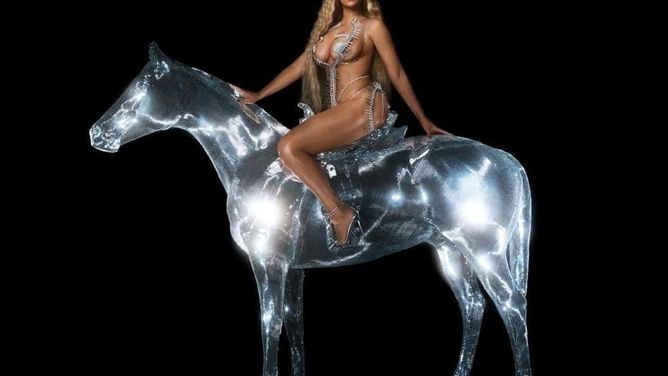 Beyoncé has always seemed to fans like a superior being from another planet, and she confirms this suspicion on “ALIEN SUPERSTAR,” a highlight of her just-released album RENAISSANCE. As expected, every song off the LP immediately soared into the Top 20 of the Genius Top Songs chart, but “ALIEN SUPERSTAR” became the early frontrunner and slipped into the No. 1 spot.

Produced by Beyoncé, Chris Penny, Luke Solomon, and Honey Dijon—and penned by Beyoncé and a small army of co-writers—“ALIEN SUPERSTAR” is a throbbing dance track that opens with a warning from an uncredited male voice.

Please do not be alarmed, remain calm
Do not attempt to leave the dance-floor
The DJ booth is conducting a troubleshoot test of the entire system

Seemingly overriding the system, Beyoncé then jumps on the track and spends the next three minutes asserting her otherworldly brilliance. It’s Beyoncé, so none of this comes off as unearned boasting. She’s mostly just telling us things we already know—all in a sultry speak-sing verbal-sashay style that she has loads of fun with.

I’m one of one, I’m number one, I’m the only one
Don’t even waste your time trying to compete with me (Don’t do it)
No one else in this world can think like me (True)

In the pre-chorus, she riffs on the word “bar” while making an expensive mess that someone will have to sweep up.

Transitioning to the chorus, Beyoncé rides a Prince-like synth lick and interpolates Right Said Fred’s “I’m Too Sexy,” an unkillable ’90s dance-pop novelty that Drake and Taylor Swift have resurrected in recent years. (The Right Said Fred guys are among the credited songwriters.) There might also be a little nod to the Purple One’s “Diamonds and Pearls.”

I’m too classy for this world, forever, I’m that girl
Feed you diamonds and pearls, ooh, baby
I’m too classy to be touched, I paid them all in dust
I’m stingy with my love, ooh, baby

In the second verse, Beyoncé likens herself to the only earthly creature she might relate to.

In the bridge, Bey is back at the bar—presumably the same one whose glassware she smashed up earlier in the song. But nobody is mad because she’s dressed to kill.

Lingerie reflecting off the mirror on the bar
Category: sexy bitch, I’m the bar
Alien superstar

The outro features a sampled portion of a speech by Barbara Ann Teer, a pioneering actor, writer, dancer, producer, teacher, and activist who founded the National Black Theatre in 1968. In the speech, Teer talks about how Black creators in her generation felt the need to push against artistic rules imposed by white gatekeepers and present their true selves onstage.

You can read all the lyrics to “Alien Superstar” on Genius now.