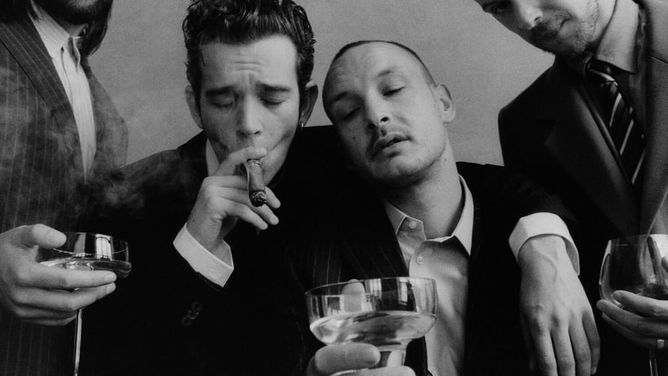 The 1975 Fall Deep In Love On New Song “Happiness”

Today, U.K. pop-rock band The 1975 gave fans another taste of their forthcoming project, Being Funny in a Foreign Language, with their new single “Happiness.” The full album is set to drop on October 14, but you can pre-order your vinyl edition of the LP on Amazon now. Alongside the release of “Happiness,” the band also announced their 2022 North American tour, which kicks off in November and includes 23 dates.

Co-produced by pop hitmaker Jack Antonoff, “Happiness” was born out of a fairly impromptu jam session over the course of about one day. The 1975 lead singer and mastermind Matty Healy explained in an interview with Zane Lowe, “There’s literally loads of us in the room on that track. Locked eyes… doesn’t really have much structure… And we haven’t done that in like years. So we just wanted this record to be really like a captured moment and not be too constructed and even produced that much.”

On the first verse, Healy has fallen in love, and it’s unlike any other love he’s ever experienced.

In my soul, I’ve got this feeling I
Didn’t know until I seen ya

This girl is so perfect, it seems impossible that Healy will manage to keep her. He worries he’s already messed it up on the second verse.

On the hook, Healy has some maturing to do if he wants to make this love last.

Show me your love
Why don’t you grow up and see?

He feels ready for that challenge on the bridge.

“Happiness” also arrived alongside a Samuel Bradley-directed music video, in which Healy performs the track for an uninterested crowd at a bar.

You can read all the lyrics to “Happiness” on Genius now.