Yafeu Akiyele Fula a.k.a. Yaki Kadafi, was an American rapper who was best known as a founder and member of the rap groups Outlawz and Dramacydal. Kadafi’s parents, Yaasmyn Fula and Sekou Odinga, were both members of the Black Panther Party. The mothers of Kadafi, Yaasmyn Fula, and Tupac Shakur, Afeni Shakur, shared a close friendship. As a result, Yaki Kadafi and Tupac Shakur were friends until their deaths in 1996. He was not in the public eye until he and the late rapper Tupac Shakur created the rap group Outlawz. The Outlawz went on to have much success and recognition in their field. Even after Fula’s death in 1996, his recordings continue to be released in the many posthumous Tupac Shakur albums, or end up being leaked online. 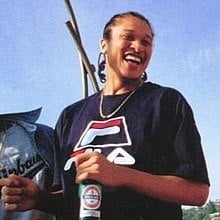