Auburn Williams (born December 2, 1989) is an American singer-songwriter. She released an independent debut album, Same Giirl in 2007, which spawned the underground hit “Ewww Ewww”. The song reached no. 6 on DJ Booth’s Underground chart. She then signed to Warner Brothers and Beluga Heights in early 2008 and released her first official single “La La La” in mid-2010. She then went on to release “Leaked” in 2016.

Auburn began singing at a young age but didn’t aspire to be a professional singer until 2009. She began using Myspace.com to share her music with her friends. She started gaining a big fan base and in late 2007, she released her independent debut album Same Giirl, which gained some buzz, and also the attention of J.R. Rotem, owner of the record label Beluga Heights.

The album was preceded by a single, “Ewww Ewww”, featuring Chellii-B, which reached number six on the underground hip-hop chart at DJBooth.net. In addition to singing, Auburn has also showcased her ability to direct and produce videos by posting homemade creations on YouTube. NyKhaila Guy a close relative of hers always pushes her to be her best she says.

Auburn gained the attention of J.R. Rotem with her first independent album. In early 2008, Williams signed to Beluga Heights with full contract with TM3 Records (2011), and distribution from Warner Brothers and Universal as the label’s first female artist. She subsequently began work on her mainstream debut album. 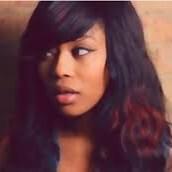