Ireland’s Number One Gangster Rappers, Blindboy Boatclub and Mr. Chrome started their careers making prank phone calls when they were still in secondary school. After Blindboy got kicked from Ardscoil, they went on to a TV and music career, having their first hit with the controversial “Horse Outside”, then continuing with a regular slot on “Republic of Telly” and doing a show at the Edinburgh Fringe. Their contract with RTE was terminated after the dressed up as Black and Tans unannounced on the Republic of Telly Xmas Special, but they’ve since worked with MTV, Channel Four, ITV and RTE again. That’s Limerick City Kid! 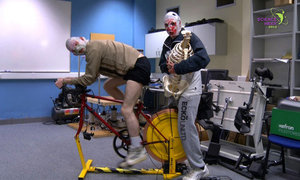