Elizabeth Woolridge Grant (b. June 21, 1985) best known by her stage name Lana Del Rey is an icon of alternative singing and songwriting.

Aged 18, she began performing in clubs around Brooklyn, NY, under various monikers including Lizzy Grant, May Jailer and Sparkle Rope Jump Queen.

She signed her first recording contract with 5 Points Records in 2007 and her first digital album Lana Del Ray a.k.a. Lizzy Grant was released in January 2010.

Traces of this era can still be found online but this commercially unsuccessful epoch was ultimately abandoned to make way for the rebrand of Lana Del Rey.

In 2011, a homemade music video for “Video Games” was uploaded to Lana’s YouTube channel. The track became a viral sensation, sparking widespread interest in the artist, and she signed with Interscope/Polydor in the October of that year. She has since delivered a flair unlike any other artist of her generation, praised for its cinematic sound and references to various aspects of pop culture, particularly that of the 1950s and 1960s Americana.

On January 27, 2012, Lana’s first major-label project, Born to Die, was released. Despite mixed reviews from critics, it is the second-longest charting album on the Billboard 200 by a female artist, and gave Lana her best-known smash hit “Summertime Sadness”.

Later that year the Grammy-nominated EP Paradise was released, and was packaged alongside the reissue of Born to Die.

Two years later, the atmospheric album Ultraviolence was released, showcasing a slightly darker sound and theme. The term comes from the Anthony Burgess novel A Clockwork Orange and refers to excessive or unjustified violence.

2015 saw the arrival of Honeymoon which Del Rey described as being “a tribute to Los Angeles”. The album became the subject of much critical acclaim, garnering the most praise of all of her projects before it, with some even calling it her best work yet.

Her fifth studio album Lust For Life followed in 2017, packing some high-profile features with artists including The Weeknd, A$AP Rocky, Playboi Carti and Stevie Nicks. Billboard called it a “new-age folk” record and it was named in the Top 50 Best Album of the Year lists by several high-profile music publications.

After much anticipation, teasing and at least one deferred release date, on August 30, 2019, Norman Fucking Rockwell! was debuted to the world. This album earned her Grammy nominations and places on year-end lists, launching her further than ever into the limelight.

Only days after NFR!’s release, in an interview with The Timesundefined, Lana confirmed that a new project entitled Chemtrails Over the Country Club (previously known as White Hot Forever) was in the works with a potential release in 2020. Nearing the end of 2019, Lana also announced she would be releasing a spoken word album on 4th January 2020, as her poetry book was taking long to hand-bind.

A visual artist as well as performer, Del Rey has released a number of music videos, including a short music film that she wrote, directed and starred in, titled Tropico. The piece features dark undertones and haunting scenes of vintage technicolor.

Lana’s lyrics explore a broad range of intricate topics such as love and relationships, famous icons and her idols, her own experiences with fame, pop culture, religion, patriotism and nostalgia.
She uniquely encapsulates a mix of magic, glamour and beauty, intertwined with grit, destruction and sadness. Vogue UK published an interview with Lana in late 2011 where it was revealed that she refers to her musical artistry as “Hollywood sadcore”.

Lana’s catalog of work is not made up of a constant stream of mainstream radio hits, and she continues to remain singular in her style of writing and singing, showing no similarity to any artist in modern pop or alternative music. 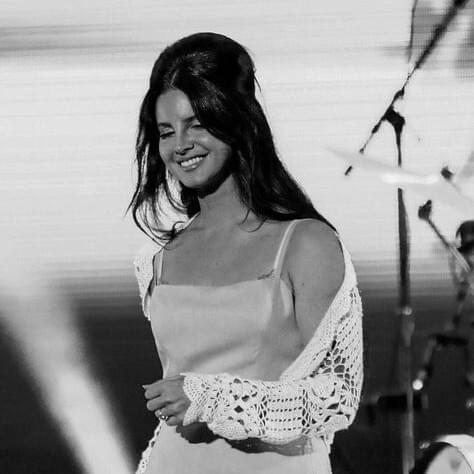