Antonio Hardy (born September 10, 1968) better known by his stage name Big Daddy Kane, is a Grammy Award-winning rapper from Brooklyn, New York. He started his career in 1986 as a member of the Juice Crew collective led by producer Marley Marl and rapper Biz Markie. Kane is widely considered to be one of the most influential and skilled MCs in hip-hop, having an impact on respected rappers such as Common, JAY-Z, and The Notorious B.I.G.

He is known for his quick flow and hardcore lyricism on tracks like “Raw” and “Set It Off” as well as the laid-back flow of “Smooth Operator” and “Ain’t No Half Steppin',” along with New Jack Swing dance songs like “I Get the Job Done.” He made appearances in the movies Posse and The Meteor Man, and he won a Grammy Award for Best Rap Performance by a Duo or Group in 1991 as a performer on the Quincy Jones track “Back on the Block.”

While he said KANE stood for King Asiatic Nobody’s Equal, BDK also said the following regarding his stage name:

Kane further explains how he got the name: 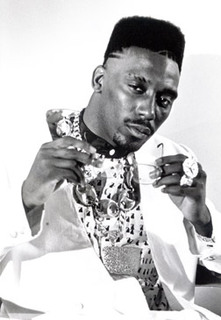