Pilot was a Scottish rock group founded by David Paton, Billy Lyall, and Stuart Tosh. Paton and Lyall were formerly members of the Bay City Rollers. Their last name’s initials, Paton, Lyall, and Tosh respectively inspired the name of the band. Guitarist Ian Bairnson also played with the group, but it wasn’t until after their first album until he became an official member of the band.

The band members, as individuals (mainly David and Ian) would go on to record together with other artists such as Elton John, Kate Bush, and The Alan Parsons Project. Alan Parsons also produced most of the group’s albums. Keyboardist Billy Lyall passed away in 1989. However, the rest of the band members are still alive to this day.

The group has spawned many hits such as Magic, Just A Smile, January, and Call Me Round. 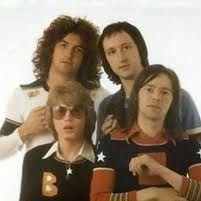