Hailing from New Orleans, $UICIDEBOY$ are a rap duo of two cousins: Scott Arceneaux Jr. and Aristos Petrou. However, many different names and personas are used in place of their real names—for example, “Ruby Da Cherry,” “$uicide Christ,” and many more—each having individual meanings. The full list and breakdown of these aliases can be found here. $B are currently signed underground rap-based record label, G*59 Records, who have also signed Ramirez and Germ.

The boys' discography ranges from horrorcore glitch-trap–working with heavy bass, to gloomy atmospherics and drugged-out rhymes. They began in 2014 by releasing the soon-to-be-infamous series, “Kill Yourself.” The cousins layered their twisted raps over short but snappy tracks, releasing albums and EP’s along the way; such as Black $uicide, Grey/Gray and YUNGDEATHLILLIFE in 2015.

Ruby has not always been a rapper. Before the era of $B—Ruby was a drummer in a punk-rock band who went by the name of Vapo-Rats. During an interview with No Jumper a few years after leaving the band Ruby explained his reasoning for his choice to depart from the group. During the interview, $crim said,

He was going hard with it, he was running everything.

I had to drag, like, three other people with me. They wanted to get fucked up. People aren’t hungry anymore.

Meanwhile, $crim began DJ'ing at the age of thirteen after his mother bought him a mixer. He started creating music and playing at parties which lead to hosting mixtapes with Chopper City which did not last long as he was stealing money from $crim. This leads $crim down a different path by creating a multitude of beats and spamming them to artists' email. This was funded through his nine-til'-five and drug dealing. However, $crim was fired due to his exotic tattoos.

After $crim’s dismissal from his job Ruby approached him with the intention of forming a rap group together. Since both of them share the same hatred, they made a pact; if $B flopped and they didn’t reach commercial success, they would both commit suicide. They explained this in an interview with Mass Appeal:

This [is] our last chance, there’s no second option, if this doesn’t happen by the time I’m thirty, and that’s pushing it, like, I’m blowing my head off. No offense to anybody that works a nine-to-five, but I just can’t fucking do that all my life.

I know that this is the only life I get and I’d like to leave my mark.

Often $B incorporate samples or lyrics from famous old-school southern rappers like Juvenile, Koopsta Knicca and Lord Infamous. Their lyrics are often compared to those who were involved in the early Memphis scene, those of which typically depict a nefarious, drug orientated nature. They reflect their New Orleans upbringing in their slang, and in their annunciation/cadence. One of $crim’s idols is New Orleans Hip-Hop legend Lil Wayne, and the entire Hot Boys sound.

After a brief hiatus touring and focussing on some self-improvement the boys both released statements on Twitter teasing fans of new music now that their tour is complete.

In early September of 2020, it was announced that Juicy J and DJ Paul of Three 6 Mafia had set out to sue the duo for $6.4 million after accusing the pair of illegally sampling the group in June of that year. Despite the fact that the groups had worked together on tracks such as “Choke Hold” from Juicy J’s 2018 album SHUTDAFUKUP which $crim produced and Carrollton where Juicy had provided the tag:

Play me some of that $uicide pimpin', man

Juicy J and DJ Paul claim the duo had sampled portions of 35 songs without clearance.

$uicideBoy$ bounced back stating that Juicy J had never paid them any fees or royalties for their production services, unpublished beats and creative contributions to both SHUTDAFUKUP and Highly Intoxicated alleging they were never even presented with contracts which signed the creative rights to the duo.

Continuing, the pair stated that Juicy J had verbally approved the clearance of any Three 6 Mafia songs the boys had used in exchange for their production services and were in doubt that both Juicy J and DJ Paul even own the rights to the majority of songs sampled by the boys.

As of October 2020, both parties have reached a settlement in principle meaning that details of royalty clearances and production services are currently being scheduled. 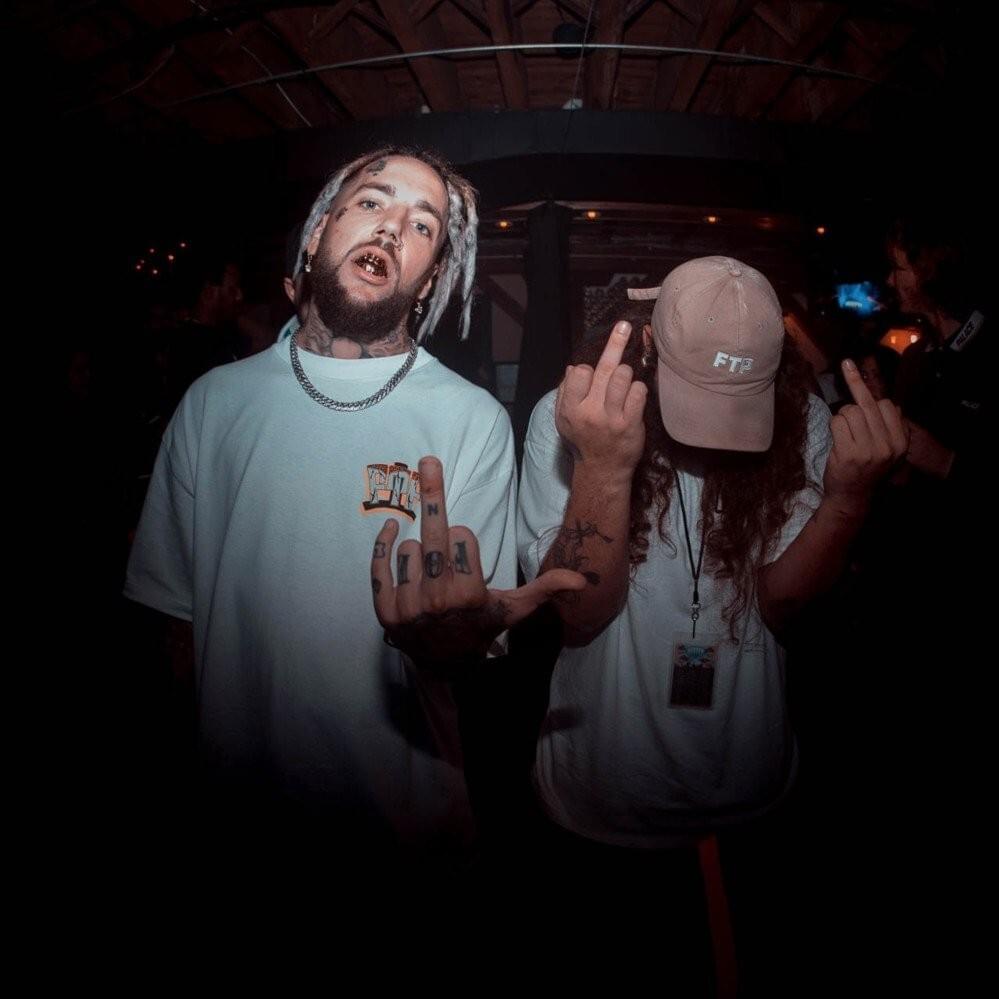