Sandpeople is a 10 man hip hop crew based in Portland, Oregon. The crew began forming around 2004 with the now defunct group, Redshield, which consisted of members Mo-B, IAMe, and Simple. In their early stages, founding member Mo-B assembled a crew of eight members who were all carving out their own respective niches as solo artists, which included Illmaculate, OnlyOne, Gold, IAME, Al-One, Simple, and DJ Spark.

The groups' appeal has grown immensely amongst industry players and fans alike because of the recent success of a few key members of Sandpeople. After winning the world-renowned battle at Scribble Jam in 2004, rapper Illmaculate went on to win back-to-back titles in the internationally recognized World Rap Championships hosted by Jumpoff .TV. He has since gained exposure through Comcast On-Demand, XXL Magazine and was named one of Vibe Magazine’s top 50 rappers on MySpace.

The crew’s producer Sapient has also made a name for himself. His signature sound is quickly gaining him a national reputation as one of the best up-and-coming talents on the independent hip-hop scene. He has produced tracks featuring: Tech N9ne, Inspectah Deck (Wu-Tang Clan), Slug (Atmosphere), Aesop Rock, Sean Price (Boot Camp Clik), and The Grouch (Living Legends), just to name a few. 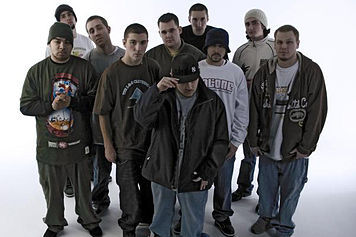