Malcolm Greenidge (born July 7, 1974), better known as E.D.I. Mean, EDIDON, and Big Malcolm, is an American hip hop artist and a member of the Outlawz. While in the third grade, Malcolm became friends with Katari “Kastro” Cox who later introduced his cousin, Tupac Shakur.In 1992, Kastro, Greenridge, and Tupac’s godbrother Yafeu “Kadafi” Fula, formed a rap trio. Greenridge began rapping under the alias “Big Malcolm”. The trio went under the names Thoro Headz and Young Thugs. By then, Tupac had become a rap star and he let them guest appear on his single, “Holla If Ya Hear Me”, which was released on February 4, 1993. In 1994, Mutah “Napoleon” Beale joined the group, which was now known as Dramacydal. On March 14, 1995, Tupac’s LP, Me Against the World, was released. They guest appeared on the songs “Me Against the World” and “Outlaw”. 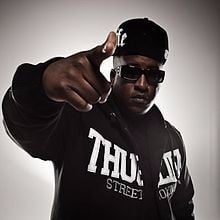