Ariana Grande (born Grande-Butera on June 26, 1993) is an actress and a pop vocalist from Boca-Raton, Florida. She had performed in many plays as a child but didn’t make a significant dent in her dream to become an R&B star until being cast as a cheerleader in the Broadway musical 13, earning a National Youth Theatre Association Award for her performance.

Soon after, she was able to land a role in the Nickelodeon hit TV series, Victorious, which propelled her to become a teen idol as her on-screen character seemed to be “very impressionable and easily swayed” but “generally sweet.” From this point on, she was able to garner the fan base that allowed her to create tracks that worked only towards the promotion of the show, like “Put Your Hearts Up.”

She would have to wait until August 2012 to see the cancellation of Victorious, which allowed Grande to finally make music her priority. With her life now revolving entirely around this passion, she was able to release her debut album, Yours Truly: the result of a three-year endeavor. She completed the album, initially titled Daydreamin, in June 2013; it was released on August 19, 2013. In September 2013, it debuted at No. 1 on the US Billboard 200 albums chart, with 138,000 copies sold in its first week, making Grande the first female artist since Ke$ha to have her first album debut atop the charts.

On August 25, 2014, Ariana Grande released her second studio album, My Everything. Selling 166,000 copies in its first week, My Everything also debuted at No. 1 on the Billboard Top 200 chart. “The Honeymoon Tour” kicked off in February of 2015, and further promoted the album.

On October 30, 2015, Ariana released “Focus.” The song was initially intended to be the lead single for Grande’s 3rd album; however, it was removed in favor for the album’s title track. The song made an appearance on the Japanese release of the album. On May 20, 2016, Grande released Dangerous Woman, which became her first album to not debut at No. 1 on the Billboard Hot 200 chart, rather debuting at No. 2, selling 129,000 copies in the first week.

On February 3, 2017, Ariana started her second tour, the “Dangerous Woman Tour,” to promote the album. On May 22, 2017, during the Manchester Arena show, Grande’s performance was interrupted by a terrorist bombing. The tragedy killed 22 people and injured almost 800 people, and in June of the same year, Grande organized a benefit concert One Love Manchester to support the victims and their families.

Over two years later, Grande released her fourth studio album, Sweetener, on August 17, 2018. The album became her third No. 1 album and is her most acclaimed album to date. Sweetener gave Ari her first GRAMMY award for “Best Pop Vocal Album.”

On February 8, 2019, only six months after releasing Sweetener, Ariana released her fifth studio album, thank u, next, which included the Billboard No. 1 hits “7 Rings” and “thank u, next”, and the top five hit, “break up with your girlfriend, i’m bored.” The album contained themes surrounding female empowerment, denial, self-doubt, trauma, failed relationships, and a little bit of braggadocio.

On the last day of her Sweetener World Tour, December 22, 2019, Grande released her sixth album titled k bye for nowundefined. The release marks her first live album, containing live versions of the original tracks from Sweetenerundefined.

In May 2020, she released “Stuck with U,” her second official collaboration with Justin Bieber. The song reached No. 1 on Billboardundefinedundefined Hot 100 chart shortly after, becoming Ariana’s third No. 1 single in the US and Justin’s sixth. Later the same month, she was featured on “Rain on Me,” with Lady Gaga, which would go on to be the most nominated song of the 2020 MTV VMAS with seven nominations.

On October 23, 2020, she released the title single from her sixth studio album, positions, which was released on October 30, 2020. Collaborators on the album included Doja Cat, The Weeknd, and Ty Dolla $ign. 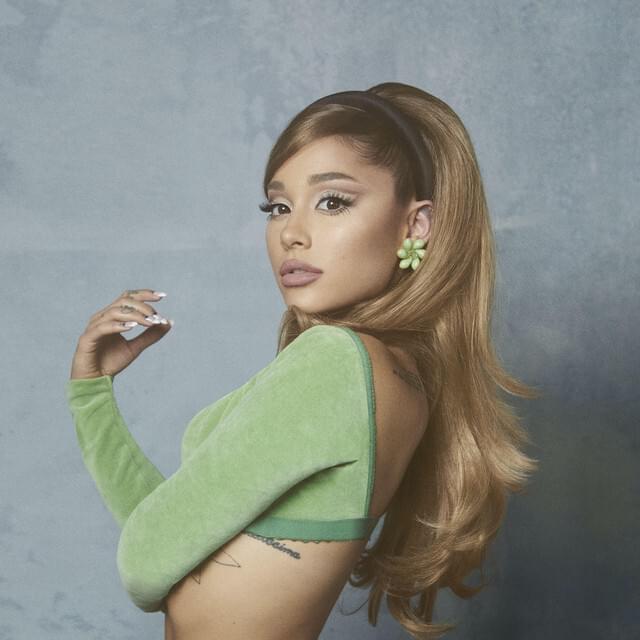